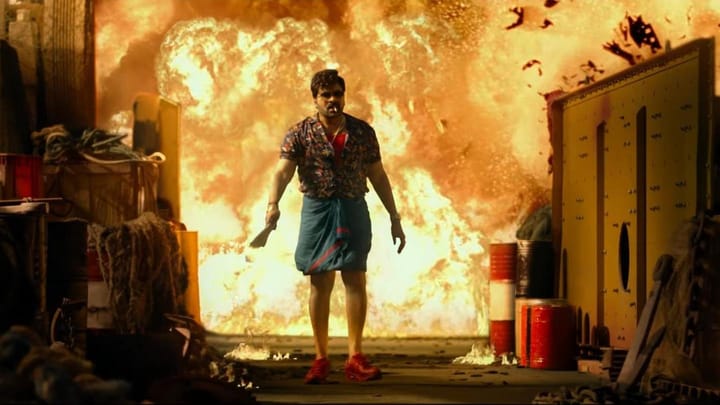 As a bumper Diwali gift for his fans, megastar Chiranjeevi just dropped the title teaser of his next venture. Giving us a glimpse into the explosive action drama, makers revealed the film will be titled Waltair Veerayya, with Chiru playing the titular role. The Bobby Kolli directorial will hit the big screens on Sankranti 2023. Let's breakdown the teaser.

To introduce the lead character, the over two-minute clip features Veerayya blowing up a goon and his men singlehandedly. The title track playing in the background and the cool reverse video effect certainly would light up the hearts of the fans. Once he's done blowing up the enemies, Chiru, dressed like fishermen, records the incident on his smartphone, asking viewers for likes and comments!

Anchor is going to be crucial in the tale

Backed by Mythri Movie Makers, Walter Veerayya will be Chiranjeevi's 154th venture. Earlier tentatively titled Mega 154, the film had locked its Sankranti 2023 release date in June this year. The date announcement poster had an anchor in the backdrop of the sea. Given, Chiranjeevi also used an anchor to finish his foes in the recently released teaser, it certainly is symbolic.

Apart from Chiranjeevi, Walter Veerayya will co-star Ravi Teja and Shruti Haasan in pivotal roles. In September, Chiru and "Mass Maharaja" were reported to have begun shooting for the actioner in Hyderabad. Devi Sri Prasad (Pushpa: The Rise—Part 1) will be composing the melodies. Arthur A Wilson (Anbe Sivam) is spearheading the cinematography department while Niranjan Devaramane (Maricha) is the film's editor.