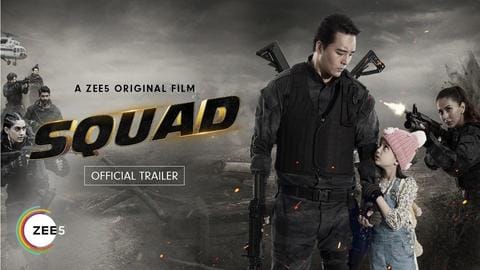 A brand new action entertainer is here! ZEE5 dropped the trailer for Squad, a straight-on action movie, starring Rinzing Denzongpa and Malvika Raaj, among others. Both the actors are debuting as lead actors with this. Notably, Rinzing is renowned actor Danny Denzongpa's son and Raaj has most famously essayed the younger version of Kareena Kapoor in Kabhi Khushi Kabhie Gham. Here's a trailer breakdown.

The clip opens with a woman briefing Indian Special Task Force (STF) officers about a six-year-old girl who is currently wanted by the armed forces of every country. Now the Indian squad, led by STF commando Bhim Rana (Denzongpa), is tasked with protecting the girl as she is Indian. This premise is accentuated with a lot of heavy firing and hand-combat sequences.

Comments
Most of the trailer is Denzongpa walking in slo-mo

Although the movie is named Squad, the undivided attention is on Denzongpa. In fact, in the three-minute-long trailer, shots of the "action star" walking in slow motion with a steely expression on his face make up for nearly half of the time frame. We hope the actor ably carries this weight. His action sequences seem decent; the rest will unfold when the film premieres.

We also get some one-on-one shots of Raaj. She doesn't deliver any dialogues while Denzongpa is authoritative in the one line he says. The background score is almost too loud and intense but it does induce a sense of urgency as scenes of combat unfold in front of your eyes. The movie co-stars Pooja Batra, Mohan Kapur, Amit Gaur, Tanisha Dhillon, and Dishita Jain.

Release
Makers have planned its launch in a safe week

Written, directed, and produced by Nilesh Zaheeda Sahay, the venture looks promising as far as Hindi action movies go. The project drops on ZEE5 on November 12, a week before Kartik Aaryan's Dhamaka drops on Netflix and on the day the Marvel movie Shang Chi premieres on Disney+ Hotstar. Watch the trailer on YouTube and tell us what you thought of it.