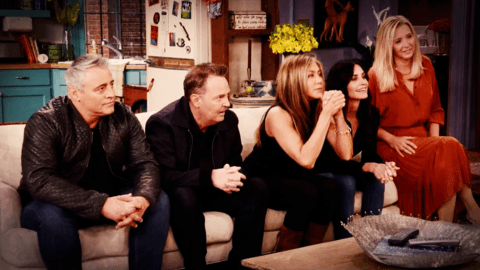 A trailer for the eagerly anticipated F.R.I.E.N.D.S: The Reunion special released. Also known as The One Where They Get Back Together, the episode will see the main cast of the hit show- Jennifer Aniston, Courteney Cox, Lisa Kudrow, Matt LeBlanc, Matthew Perry, and David Schwimmer- reunite with some special celebrity guests. The special is all set to air on May 27 on HBO Max.

Nostalgia
How well do the actual cast members remember 'F.R.I.E.N.D.S'?

Unlike the last teaser, which only showed the backs of the cast, we finally have a full 2-minute-long trailer. Fans are taken straight to Monica's apartment for a game of trivia. The main cast tries to emulate a scene from the fourth season of the show titled The One with the Embryos, where they quiz each other on personal questions about each other.

Break
Were Ross and Rachel really on a break?

The question that always left F.R.I.E.N.D.S fandom divided, "Were Ross and Rachel really on a break?," finally got a reply. "Yeah," emphasized Aniston (Rachel), as the cast sat down for an interview with James Corden, to which LeBlanc (Joey) muttered, "bulls**t," prompting Schwimmer (Ross) to break into a laugh. Actress Maggie Wheeler, who played the iconic character of Janice, also appears.

More cast
Cover your ears, Janice is back - 'Oh my god!'

Wheeler is seen saying, "Oh, my God!" in her signature shrilly voice, in the reunion trailer. The clip also hinted at a cameo by Tom Selleck, who played Monica's love interest, Dr. Richard Burke. Even Joey's "hand twin" actor Thomas Lennon, popped out from behind a curtain in the epic trailer. Alongside these fun elements, the cast also reflected on many other poignant memories.

Celebrity guests
A mind-blowing list of celebrities to show up

Host
Fans not happy with James Corden hosting the special

Many fans of the show have taken to social media to vent their displeasure at Corden hosting the reunion special. They are frustrated that it could have been hosted by one of the many famous guest stars like Paul Rudd or Brad Pitt. "James Corden adding the F.R.I.E.N.D.S reunion to the list of things he's ruined with his mere presence," a Twitter user said.

Accolades
The show is truly a global phenomenon

F.R.I.E.N.D.S consisted of 236 episodes and aired on NBC originally from 1994 to 2004 for 10 seasons. The sitcom found a way into the heart of fans globally with some of the reruns still running successfully in many countries. It won six Primetime Emmy Awards, one Golden Globe Award, one Screen Actors Guild Award, and six People's Choice Awards during its run.