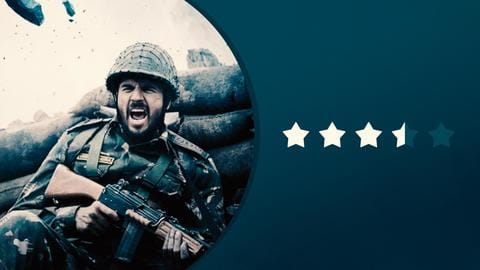 Makers of Shershaah dropped a new promotional song titled JaiHind Ki Senaa today, ahead of its August 12 global premiere on Amazon Prime Video. The goosebump-inducing track has been composed and voiced by Vikram Montrose. Manoj Muntashir has written the lyrics, while lead star Sidharth Malhotra features in the video. Notably, this track will not be a part of the film. Here's our review.

The about three-minute-long track is catchy from the get-go. The use of clock sound at the beginning brings in a sense of urgency, which complements the booming chorus. It is an ode to Shershaah (the code name of Captain Vikram Batra in Kargil War) and other Shershaahs, as understood here, "Shershaah hardam rahega sarhado ko yaad tu (The borders will always remember you, Shershaah)."

Comment
We should celebrate soldiers' valor but should not glorify martyrdom

While the track is well made, I can't brush aside the blatant glorification of martyrdom. The lines borrowed from Bhagawad Gita, "Svadharme Nidhanam Shreyah (attaining death while following your religion is the best)" are supported by another line that says, soldiers' religion is to fight. These add to the notion that soldiers are fearless heroes who're almost happy to die. Honestly, that's a fairytale.

The same emotion was seen in another promotional video for upcoming patriotic release, Bhuj: The Pride of India. Ajay Devgn, who leads the film, was seen reciting a poem Sipahi, also penned by Muntashir, which romanticized a soldier's death. Seeing the same thing on screen for decades, it's time Bollywood produces projects sans toxic masculinity. Because mard ko bhi dard hota hai.

Coming to the video, makers have used the space to tease scenes from the movie and have masterly placed certain well-executed action sequences. We see montages of Indian soldiers getting trained in harsh conditions. Malhotra as Batra looks solid, as he leads fellow soldiers through the war and his fans can expect a lot of action and thrill. Overall, the song gets 3.5/5 stars.