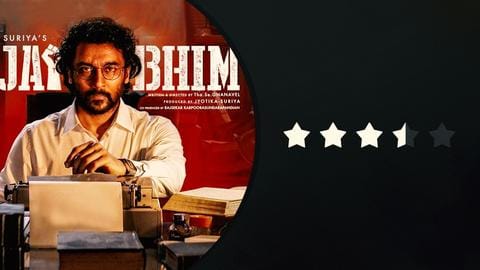 Ahead of the release of superstar Suriya's next, Jai Bhim, makers have dropped the first song from the flick. Titled Power, the track has been composed by Sean Roldan, and Arivu (Enjoy Enjaami-fame) has written and performed the robust number. This comes days after Amazon Prime Video had dropped the teaser for the social drama. Here's our review of the song and lyrical video.

Nearly inching toward the four-minute mark, Arivu is super energetic in a catchy track. With the use of repetition and rhyme, we get a trendy number in our hands. The spitting rap in Tamil hooks you right in. As per the English translation of the lyrics, the song talks about reclaiming the power that had been denied and it goes well with the theme.

As Suriya plays a righteous lawyer who comes to the defense of victims of social oppression and discrimination in the movie, the shot of BR Ambedkar speaking of abolishing untouchability really sets the tone right. We also get scenes of Arivu breathing life into the song in the studio. And of course, Suriya's impressive scenes from the movie make their way into the video.

The social drama, produced by Jyotika and Suriya, will be hitting Amazon Prime Video on November 2. This film is part of the four-movie deal signed in between Suriya's 2D Entertainment and the streamer. Already, Raame Aandalum Raavane Aandalum and Jyotika-starrer Udanpirappe have come out in the previous months. Oh My doG will be the final movie, which is set to premiere in December.

Verdict
'Jai Bhim' will be releasing in both Tamil and Telugu

Now coming back to Power, the song gets 3.5/5 stars. Written and directed by Tha Se Gnanavel, Jai Bhim is a courtroom drama where Suriya plays advocate Chandru. The primary cast consists of Prakash Raj (as a police officer), Rao Ramesh, Rajisha Vijayan, Lijo Mol Jose, and Manikandan. It will be released in both Tamil and Telugu languages on the OTT platform.