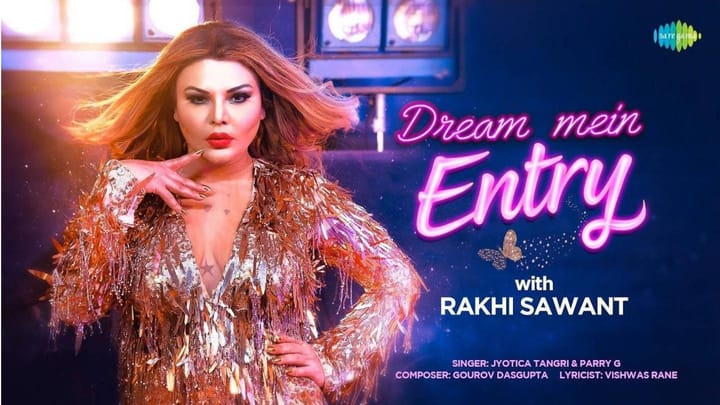 Rakhi Sawant is back with a bang! The performer's new music video was recently released on YouTube and gained close to 21 lakh views in less than four days. Dream Mein Entry reminds fans of Rakhi's good old music video days of Pardesiya and the likes. The party song is sung by Jyotica Tangri and rapped by Prikshit Gupta aka Parry G. Here's more.

In this video, Rakhi, known for her eccentricities and questionable comments, reminds you why she caught all the attention originally—the killer dance moves. The 42-year-old dances like a dream to a song that doesn't bring anything to the table. She also manages to look stunning in all the outfits she adorns, it's just her expressions that look a bit frozen throughout the video.

The song on the other hand is an abomination

Meanwhile, the music composed by Gourov Dasgupta and lyrics written by Vishwas Rane are honestly pretty meh! The tempo keeps changing without any explanation, the party song suddenly transcends to rap before going into a slow, romantic sort of vibe. The lyrics also feel pretty forced and just strung together to make a rhyme. Production is very '90s with not much emphasis on freshness.

Rakhi sang the song while getting her COVID-19 vaccine

Rakhi unofficially teased the song earlier when she sang a few lines of it while getting the first dose of her COVID-19 vaccine. She shared the official teaser on her social media a few days ago with the caption, "Tyaar Ho jao meri Entry ke liye - 18th June ko Saregama Music YouTube channel par!" Saregama described it as the perfect bachelorette party song.

In other news, Kamaal R Khan recently shared an audio clip of Rakhi on social media in which she reportedly is reacting to his diss track on Mika Singh. KRK and Mika have been involved in a long-standing social media feud, which has now graduated to them calling each other names like "suar" and "kutta". Notably, Rakhi was last seen on Bigg Boss 14.