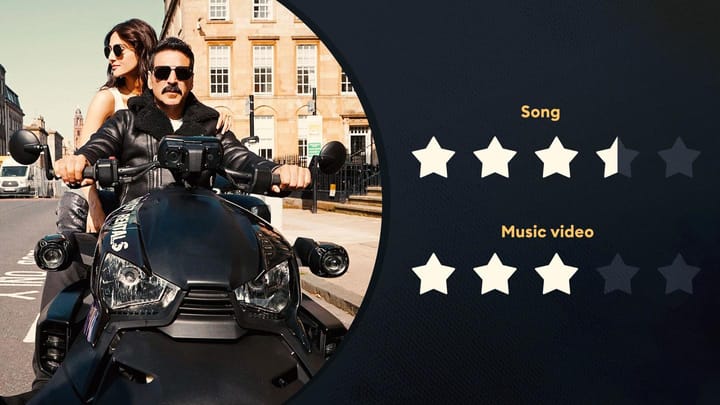 Akshay Kumar just dropped a peppy number from his upcoming movie, Bell Bottom. Titled Sakhiyan 2.0, this track is the rehashed version of Maninder Buttar's 2018 song. The new song is not entirely unbearable, and it's because the original singer is the composer. Buttar has crooned it too, alongside Zara Khan and has teamed up with Tanishk Bagchi for music. Here's our review.

Song is dedicated to 'all hopeless romantics'

Buttar's voice had already won hearts earlier, but this time it is Khan's vocals that added something new to the rehashed version. Also, the lyrics of this track have been changed to suit Vaani Kapoor and Kumar's chemistry. While the original was about a girl doubting her boyfriend, the remake is dedicated to "all the hopeless romantics".

The video has nothing new to offer

The music video on YouTube shows Kapoor-Kumar dancing, riding an expensive bike and driving a vintage car. And that's it! The clip is not impressive and has nothing good to offer, except beautiful locations. Also, the Befikre actress looked pretty, while Kumar is seen dancing wearing a black shoe on one foot and white on the other. Overall, the duo's on-screen chemistry stands out.

When there's Kumar, netizens rarely say anything negative. And Sakhiyan 2.0 has the Khiladi actor as well as Buttar. Many praised the "beats of the song," while most of the fans have lauded the chemistry of Kumar and Kapoor. A user appreciated the Airlift actor's "fitness level" and called the song "top-notch remix." "Outstanding," "Blockbuster," "Mind-blowing" are some of the adjectives used for it.

For this song, the original track's team has joined the Bell Bottom crew and produced a music that will make you want to groove. And, people will like this version too, because the original one was a big hit. But this proves that Bollywood has lost the creativity of delivering original content, music, films or otherwise. Verdict: 3.5 stars (song), 3 stars (MV).