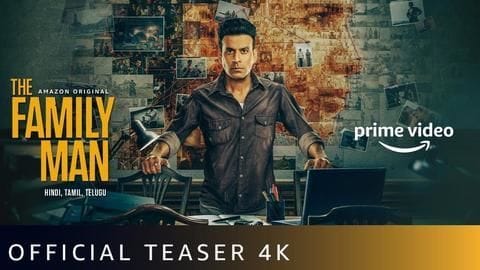 Manoj Bajpayee's upcoming Amazon Prime Video series The Family Man Season 2's teaser is now out. The promo clip shows Bajpayee's character being missing in action, while his colleagues are looking for him to be back for a new mission. The trailer of the highly-anticipated web show will be out on January 19, 2021. Here are more details on this.

Details
Srikant is back in action

The teaser opens with Srikant's (Bajpayee) wife (played by Priyamani) and his kids along with his friend (Sharib Hashmi) and others looking for him. It then intensifies with Srikant entering a fight sequence, as he is given a new task by officials. Toward the end, the makers introduce actor Samantha Akkineni, who is making her digital debut with the series.

Teaser
Action, drama and a whole lot of suspense

Directed by Raj and DK, the second season of Bajpayee's hit series promises an intriguing mystery as well as a lot of action and drama. While the one-minute-long teaser gives viewers a glimpse of Srikant's secret mission, it also hints that the personal life of the Family Man is falling apart. Meanwhile, Akkineni's character's introduction will leave you wanting to know more.

Release
The show will premiere in February

The second leg of the intriguing action-thriller show is scheduled to premiere on the streaming service Amazon Prime Video on February 12. Last week, the makers had shared a motion poster, writing, "Srikant mission ke peeche aur villain Srikant ke peeche! #TheFamilyManOnPrime on February 12! (sic)" It will be available in three languages, viz. Hindi, Tamil and Telugu.

Quote
Directors are thrilled to be back with season two

"The response to first season was overwhelming and it struck a real chord with the viewers. And we are hopeful that we can continue to tell a story which is, as compelling and engaging as the first season (sic)," directors Raj and DK said.

Released in 2019, the first leg of The Family Man was lauded for its gripping storyline and strong performances. The story of the show revolves around an intelligence officer and his misadventures, while he tries to maintain a balance between his personal life and secret professional commitments. Apart from The Family Man's second season, Prime Video also has Saif Ali Khan-starrer Tandav coming up.