Angelina Jolie impresses in 'Those Who Wish Me Dead' trailer 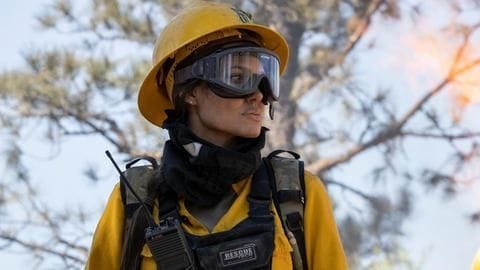 Angelina Jolie is leading the upcoming survival drama Those Who Wish Me Dead and looks right in her element in the trailer. Based on Michael Koryta's 2014 novel by the same name, Jolie plays a firefighter in the film. The trailer hints that she battles all odds to protect a 12-year-old child amid a raging forest fire. Here's our breakdown of the trailer.

In this article
Premise

Jolie risks it all to save a kid from assassins

The trailer opens with Jolie's Hannah who has been stationed at a fire tower. While she is still struggling with thoughts of a prior failed mission, she comes across a kid, Connor (Finn Little), on the run. It's then revealed that a couple of assassins have killed Connor's father and are now hunting for him, prompting the protagonist to take him under her wing.

The trailer also shows that the two assassins (played by Nicholas Hoult and Aidan Gillen) trigger a wildfire to zero in on Connor. The movie, which looks promising, has been helmed and co-written by Oscar-nominated Taylor Sheridan. He is celebrated for his work in the neo-western genre and has penned movies like Sicario and Hell or High Water. He has also directed Wind River.

Apart from the aforementioned cast members, Those Who Wish Me Dead also features Jon Bernthal as a local sheriff. Tyler Perry, Jake Weber, James Jordan, and Tory Kittles are also part of the project. Further, Jolie, who has shown her prowess with movies like Lara Croft: Tomb Raider, Salt, and Mr. & Mrs. Smith, will return to the action genre with the upcoming release.

She explained why action was different this time

Jolie told EW that the director's "unique voice when it comes to characters within America" drew her to the project. "I wanted to be in this world with him," she added. The Maleficent actress also pointed out that action was different this time around "because it was real." Those Who Wish Me Dead will release in theaters and HBO Max on May 14, 2021.