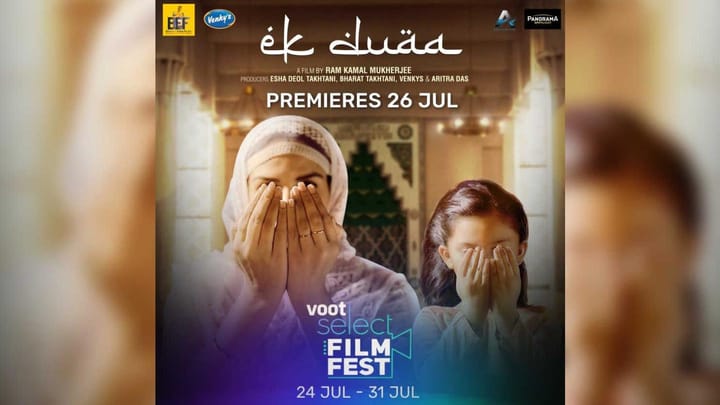 Esha Deol Takhtani has now turned producer for a Voot film, Ek Duaa. She is also the lead in this Ram Kamal Mukherjee directed flick, which deals with a mother trying to find equal love for her daughter in a family that neglects the girl child. Deol released its trailer today and informed that the premiere date of the movie is July 26.

What is in the trailer?

The trailer shows Deol being married to a poor family, which comprises a husband, their two children— son and daughter (Duaa), and his mother. The mother-in-law advises Deol to give birth to a second son, who'll bring happiness and growth to the family. Duaa quietly stands in a corner, listening to this. Soon we see the family ignoring her. Deol is Duaa's only support.

Deol shared the trailer and release date on Twitter

Our film "Ek Duaa" premieres on Monday 26th July 2021 on @VootSelect . Do watch it and give us your love, good wishes, Duas blessings. ♥️🧿

While the trailer highlights the importance of a girl child and her happiness, which might attract viewers, Deol's bland performance (at least what was seen in the trailer) might cast an opposite effect. Even in the poster, her poker face lacks all the elements to connect with the audience. To note, the film is co-produced by her husband Bharat Takhtani, Venkys and Aritra Das.

Movie to premiere during the Voot Film Festival

The digital platform is holding Voot Film Festival from July 24, where several short films like Vidya Balan's Natkhat, Lihaaf, Khauff, A Short Hello and Bhaskar Calling will be premiered. Ek Duaa will release on July 26, along with a total of 15 films that will be premiering in the fest. The gender-equality themed film also stars Barbiee Sharma and Rajveer Ankur Singh.

This is what Deol said while announcing her film

'Rudra: The Edge of Darkness' to mark her OTT debut

Deol, who last appeared in 2019 short film Cakewalk, is making her digital debut soon. Along with Ek Duaa, she is also prepping for Rudra: The Edge of Darkness, which is slated to premiere on Hotstar. The actress will share screen space with her Yuva co-star Ajay Devgn. To note, it's an official adaptation of Luther, a British drama series headlined by Idris Elba.