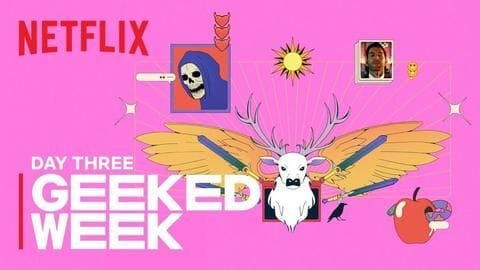 It is day three, and Netflix's Geeked Week promises to be even better. After two successful days packed with incredible teasers, cast interviews, and other major announcements, fans eagerly looked forward to more updates on their favorite shows, movies, and anime. Today's focus remained on Lucifer, Stranger Things, Fear Street trilogy, Trese, and other intriguing titles. There's so much to get geeked about!

Horror fans were treated with a new trailer of Fear Street, based on the best-selling RL Stein novels. The tagline says, "Three movies, three weeks, one killer story." The trilogy takes us through 300 years, including a movie set in the year 1666. The trailer includes all kinds of ghostly figures, and Stein fans are waiting to see their favorite book come to life.

The Devil has returned once again, and this time, things are getting steamier. Lucifer season 5B is now on Netflix, and we got an exclusive look at hilarious bloopers. The cast members also did a table read of the pilot episode. Meanwhile, a new Gunpowder Milkshake teaser was unveiled. The incredible cast includes Karen Gillan, Paul Giamatti, Carla Gugino, Lena Headey, and more.

Watch this! (You'll understand that reference once you watch these Lucifer bloopers.)

Karl Schaefer, the creator of Z Nation, confirmed the zombie series Black Summer is returning for a second season. Fans got an exclusive look at the trailer that shows a band of strangers coming together during a zombie apocalypse. The trailer reminded us, "The greatest threat to humanity is humanity itself." Lead actor Jaime King confirmed the second season hits Netflix on June 17.

During a zombie apocalypse, you do what you must to survive. Here's a look at season 2 of Black Summer, coming to Netflix on June 17th. #GeekedWeek pic.twitter.com/oexOuCd2NN

Awake, starring Gina Rodriguez and Shamier Anderson, is now streaming on Netflix. The movie focuses on what happens after a mysterious catastrophe wipes out humanity's ability to sleep. It takes us through Rodriguez's journey as she experiences different stages of no sleep. Viewers were also introduced to a new coven from The School for Good and Evil, based on Soman Chainani's first novel.

Meet The Coven of The School for Good and Evil. Demi Isaac Oviawe is Anadil Kaitlyn Akinpelumi is Dot Freya Theodora Parks is Hester #GeekedWeek pic.twitter.com/5q36OsMlfc

Duffer Brothers, creators of Stranger Things, confirmed that season four is currently in production. While sharing a video from the sets, the duo revealed new cast members AmyBeth McNulty, Grace Van Dien, Regina Ting Chen, and Myles Truitt. Along with this, a prequel podcast series and a book based on Stranger Things were also confirmed. It will explore the back story of Robin Buckley.

all aboard! the Duffer Brothers are here with special news that they want to personally share with you. @stranger_things #GeekedWeek pic.twitter.com/TVheNMqgUl

Trese takes us through the journey of Alexandra Trese, a detective who solves crimes involving supernatural entities. Netflix dropped the opening five minutes of the series, and it's definitely worth the hype. The series is based on the Filipino horror comic by the same name.

On Wednesdays, we wear black. Get a first look at Trese, dropping this Friday on Netflix. #GeekedWeek pic.twitter.com/xVRTYSwUo7