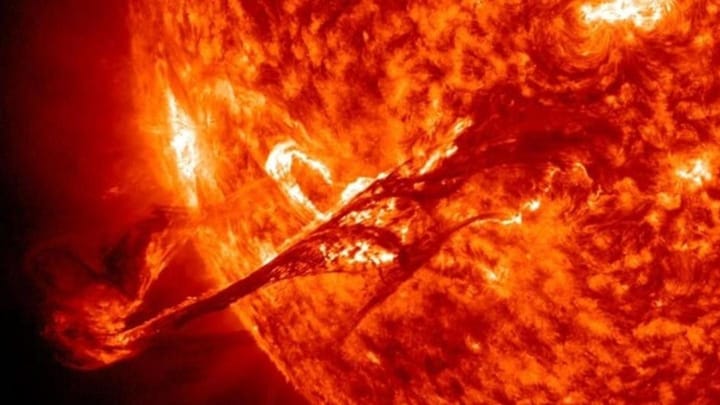 On Monday morning, we witnessed the sun flexing its mighty magnetic muscles, which resulted in an M-class flare that lasted for about three hours. The high-energy electromagnetic radiation was caught by two solar spacecraft on video, including NASA's Solar Dynamics Observatory (SDO). The effect of the long-duration solar flare was even felt on Earth, causing brief radio blackouts in the Asia-Pacific region.

The solar flare is associated with sun's coronal mass ejection

The recent three-hour-long solar flare from the sun came after two weeks of relative quietness. The flare is associated with a coronal mass ejection (CME), which are large expulsions of superheated plasma from the sun that move at a tremendous speed. The flare was registered by the SDO as an M3.4, making it a medium class solar flare.

What is a solar flare?

A solar flare is an intense explosion of electromagnetic radiation that happens when magnetic energy associated with sunspots is suddenly released. They are classified into three categories, namely C, M, and X, with X being the most intense and C being the weakest.

SDO and SHO caught images of the flare

The solar flare was observed by the SDO and Solar and Heliospheric Observatory (SHO). The SDO has been studying the sun since 2010 from the Earth's orbit. The SHO, a NASA/European Space Agency probe launched in 1997, circles the sun at the Lagrange Point 1, a gravitationally stable spot in space. Considering their different orbits, the images captured by the two spacecraft are complementary.

Despite not being an intense X-class solar flare, the radiation was strong enough to cause radio blackouts in the Asia-Pacific region on Earth. The partly Earth-directed flare is expected to side-swipe our planet on June 15, according to NASA. This may cause some disruption to GPS and navigation systems. However, the big CME released along with the flare does not appear to be Earth-bound.

Mild aurora expected due to the solar storm

Our #Sun wakes up big-time. A massive, partly Earth-directed #solarstorm launched yesterday should side-swipe Earth by midday June 15 according to NOAA/SWPC predictions. NASA predicts impact early on the same day. Expect mild #aurora to be extended by a fast #solar wind chaser! pic.twitter.com/egz469NP07

Big CMEs can even cause satellite damage

Big CMEs that hit Earth can create powerful geomagnetic storms, which can have both positive and negative impacts. At its worst, it can cause satellite damage, and at its best, it can lead to supercharged auroras.

Share this timeline
Facebook
Whatsapp
Twitter
Linkedin
Athik Saleh
Twitter
Athik Saleh covers auto and tech news at NewsBytes. He had started as an SEO content writer at NewsBytes and has since been elevated after exhibiting his automotive acumen. He has previously worked as a columnist at Law Insider India. He has a Bachelor's degree in Law from the National Law Institute University, Bhopal.
Latest
European Space Agency
NASA