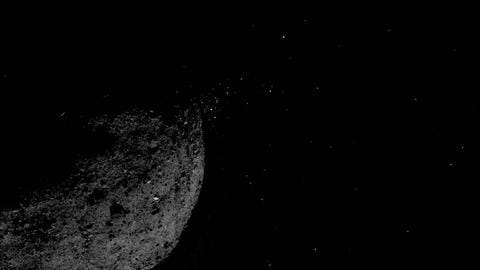 Two years after its OSIRIS-REx spacecraft collected samples from asteroid Bennu, NASA has revealed something astonishing about the asteroid's surface. According to the space agency, the particles making up Bennu's surface are so loosely packed and lightly bound that a person stepping onto the asteroid would feel very little resistance. Bennu was first discovered by scientists in 1999.

Context
Why does this story matter?
Surprise
The spacecraft sank 30-inch after touching down on the asteroid

OSIRIS-REx's mission on Bennu was nothing short of dramatic. Mission scientists expected the asteroid to be rigid. However, the spacecraft's landing created a 26-foot-wide (8m) gaping hole at the site called 'Nightingale.' The touch-down caused an explosion that saw a giant wall of debris flying away from the sample side. About the event, Lauretta said, "For spacecraft operators, it was really frightening."

The findings of OSIRIS-REx's mission on Bennu were revealed in two papers by Lauretta and another researcher named Kenny Walsh. Stepping on the surface of the asteroid was likened to entering a pit of plastic balls due to the very little resistance it offered. The density of the surface material was only 500-700kg/cubic meter, much less than a typical Earth rock (3,000kg/cubic meter).

What's inside?
Interior of the asteroid may have organic molecules

Scientists found that the surface boulders on Bennu are very porous and have a lot of void space between them. The surface of the asteroid appeared bluish, while the interior appeared redder. The blue color of the surface is a result of cosmic rays and space weather. The red hue, however, is interesting, as it hints at the presence of organic molecules like hydrocarbons.

Asteroids like Bennu, barely held together by gravity or electrostatic force, could pose a different threat than solid asteroids. Scientists assume that many other asteroids sport a similar "rubble pile" structure of conglomerations of rock, gravel, and dirt. "I think we're still at the beginning of understanding what these bodies are, because they behave in very counterintuitive ways," said Patrick Michel, an OSIRIS-REx scientist.

Information
The spacecraft will deliver sample from Bennu next year

OSIRIS-REx managed to collect almost 250g of asteroid Bennu's dust, four times more than what's needed for analysis. The sample is scheduled to be delivered by September 2023. After delivery, the spacecraft will head to Apophis, another high-risk asteroid.