Now, you can control robots with simple hand gestures 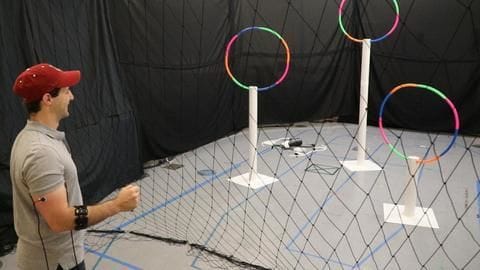 Even with all the advancements and technologies, most of the commercially available robots are operated by joysticks and smartphones. The method ensures full control over the machines, but there might be a more natural way to do the same. Case in point: A new MIT CSAIL technology that allows you to control robotic systems via nothing but simple hand gestures. Here's all about it.

The new system, dubbed Conduct-A-Bot, revolves around the use of sensors and a sophisticated AI algorithm. First, you wear sensors - including electromyographic electrodes and motion detectors - on your biceps, forearms, and triceps and make various hand movements. Then, the motion of the hand/arm is picked up by these sensors and transmitted to the algorithm for processing.

Once the algorithm processes the hand signals and defines the gestures being made, it guides a robot to perform coded actions. This basically means that the machine responds to the movement of your arm/hand. The MIT team was able to use the system to steer a drone through a range of gestures, including hand waves, arm-tensing as well as clenching and rotation of fists.

The team also got some impressive results in a field test of the technology. Specifically, out of more than 1,500 gestures they tried, the system was able to detect and execute more than 81% on the drone. This is not perfect but good enough to show that we may soon have robots that could be controlled easily via hand gestures.

Work
Work going on to improve the system

That said, the MIT team now plans to improve the system so that it could detect gestures more accurately, even learn them to respond quickly. If they succeed in this endeavor and the tech is deployed commercially, robot operation may become way easier and more organic than it is. And, that could be really helpful for search-and-rescue and other tasks requiring swift machine response.