Yesterday, NASA's 2020 Perseverance rover relayed video and audio feeds from Mars. The rover had landed successfully on Mars' Jezero Crater on February 18. It has now sent footage of the landing and a brief audio recording of the sounds from the red planet. NASA says the microphone captured sounds of a Martian breeze and mechanical din of the rover in operation. 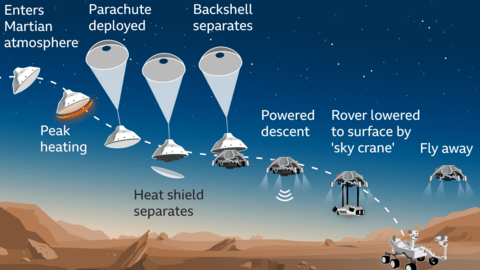 The video shows the parachute opening to slow down the spacecraft, followed by the heat shield dropping to the surface. The video from multiple angles also shows dust and small rocks being kicked up by the thrusters of the sky crane used for the rover's final descent. The video ends with Perseverance's wheels making contact with Mars and pyrotechnically-fired blades severing the crane's cables.

A total of five cameras filmed the Perseverance rover's descent. Two cameras were mounted on the back of the capsule holding the rover, one camera was in the sky crane that lowered the rover, and there were two more cameras on the rover itself.

The audio recording sent back by Perseverance was recorded using an off-the-shelf microphone. The device didn't collect usable data during the descent. However, a Martian breeze is audible 10 seconds into the 60-second-long clip shared by NASA. The microphone also picked up mechanical sounds of the rover in operation. NASA released two audio clips, one with the rover's own sounds and one without.

On Monday, NASA also released the first panoramic photograph of the rover's landing location. The rover documented more than 30GB of information including 23,000+ images during the landing alone. NASA has begun to release these images to the public. NASA administrator Steve Jurczyk said the rover has provided some of the most iconic visuals in space exploration history.

Lead engineer for the Perseverance rover's camera and microphone systems at NASA, David Guell said the camera system was put on the spacecraft because NASA wanted to take the public along for the ride of a lifetime—landing on the surface of Mars. In the coming weeks, the space agency will perform system checks on the rover to ensure its preparedness for the two-year-long mission.