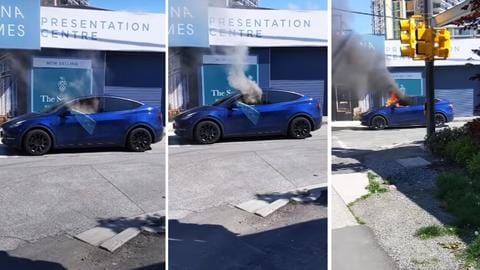 Tesla's all-electric SUV, the Model Y, caught fire in a strange but scary incident in Canada. The driver said that the vehicle alerted him of an error, shut down, and started emanating smoke. He also claimed that he had to break the window to escape, as the doors were locked in the emergency situation. The incident has surfaced online via a video on YouTube.

Context
Why does this story matter?
Timeline
How did the incident take place?

The driver, Jamil Jutha, was driving in the North Vancouver region in his 2021 Tesla Model Y. The car suddenly lost power, shut down, and immediately started filling the cabin with smoke through the air vents. As the doors were jammed. Jutha broke the driver's door window by kicking it. He managed to climb out through it and the fire started soon after.

Information
Tesla has an emergency release mechanism for all vehicles

The doors of Tesla cars are operated electronically in regular conditions, but they do have a mechanical release in-built for facilitating exit in an emergency situation. However, Jutha said that it was not easy to figure out under immense pressure.

Quote
'The battery died and car went up in flames'

"My car just started going into flames, not flames but it's smoking up, my battery died on my Tesla and I don't know what happened," Jutha said while describing the incident in the video. "All of a sudden the battery started smoking. My car just got set on fire. The whole car is on fire," he added.