'Bhoot Police' trailer: Saif and Arjun are on ghost-hunting duty 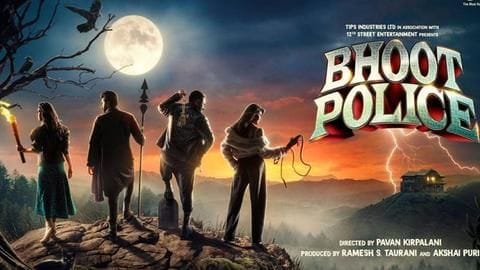 The most anticipated trailer of the upcoming horror-comedy flick, Bhoot Police, was dropped online today. Starring Saif Ali Khan and Arjun Kapoor as desi ghostbusters, the movie is helmed by Pavan Kirpalani, who is known for directing Radhika Apte's Phobia (2016) and Rajkummar Rao's Ragini MMS (2011). It also stars Jacqueline Fernandez and Yami Gautam in pivotal roles.

Trailer
Khan is a non-believer, while Kapoor believes that ghosts exist

Kapoor believes in ghosts, while Khan turns a tantrik only for money, which is shown in a scene where the duo gets paid and Khan asks the client, "GST uncle?" Bollywood's Nawab is portrayed as a non-believer, but he agrees to hunt a stubborn ghost to impress Fernandez. Meanwhile, Kapoor uses ghostbusting knowledge to try to get rid of the spirit.

Performances
The actors look decent in their avatars, as per trailer

According to the posters, the characters' names are Vibhooti (Khan), Chiraunji (Kapoor), Maya (Gautam) and Kanika (Fernandez). Going by the trailer, the actors look decent, but nothing extraordinary. Kapoor's expression is the same throughout the trailer, while Khan is funny yet seemed a bit out of place among other stars. Fernandez's screen time is lesser than Gautam's, who is impressive in the clip.

The YouTube video received some mixed reactions from the fans. Some found it "promising," while many thought only Khan and Gautam can save the film from drowning. Fans also praised the Tandav actor's "comic timing" and expressed their desires to watch him in theaters. Even Kapoor impressed some users, one of them wrote, "Arjun looked slightly better in the trailer than his maximum works."

Produced by Tips Industries Ltd and 12th Street Entertainment, Bhoot Police is the first flick that brings Kapoor and Khan together on-screen. Earlier, it was scheduled to release in theaters on September 10, but the second wave of COVID-19 forced the makers to opt for an OTT release. Now, this spooky yet hilarious movie is slated to premiere on Disney+ Hotstar on September 17.