'Rammo Rammo' review: Sonakshi nails it with her garba moves 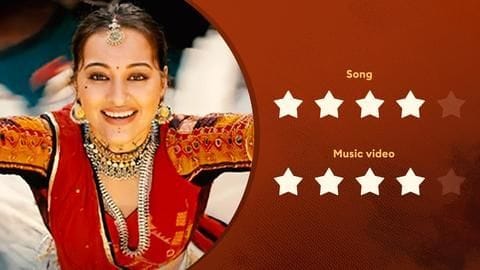 Ajay Devgn shared a new song from his upcoming war movie, Bhuj: The Pride of India. Titled Rammo Rammo, it features Sonakshi Sinha and Sanjay Dutt, who bring the vibrant dance forms of Gujarat, garba and dandiya, on the screen beautifully. What makes the song even better is the trio of talented singers comprising Udit Narayan, Neeti Mohan, and Palak Muchhal. Here's our review.

Song
Song is about romantic banter between Lord Krishna and Radha

Muchhal and Mohan are some of the favorite singers of this generation, and they have crooned this track melodiously. But it's Narayan who got us excited. The combination of his voice and Dutt's lip sync took us back to the '90s. Also, lyricist Manoj Muntashir has done a brilliant job with the lines, which explain a romantic banter between Lord Krishna and Radha.

Sinha looks gorgeous, while performing garba and dandiya in a colorful Gujarati ghagra choli. Not only her moves, the Dabangg star also delivers wonderful expressions. And Dutt's appearance in the video blends nicely with the well-sequenced choreography. From the hook step to the helicopter shot of the group performing garba, this video is a visual treat, and reminds us of Lahu munh lag gaya.

Verdict
Pick the dance steps from this song before Navaratri

This T-Series track has been shot on a grand scale and it gives the vibes of all the festival-based numbers. Rammo Rammo can be a great Janmashtami and Navaratri number. Also, the dance steps are pretty simple, so learn them before Navaratri hits this year and become a rage! Overall, this song gets a thumbs-up. Verdict: 4 stars (each for song and music video).

Release Date
'Bhuj' is set to premiere on August 13

Before this, the makers have dropped three songs — Hanjugam, Zaalima Coca Cola and Bhai Bhai. Bhuj: The Pride of India is a multi-starrer project, which is highly anticipated, and is going to release on Disney+ Hotstar. It is slated to premiere during Independence Day week on August 13. The Abhishek Dudhaiya-directorial stars Devgn, Sinha, Dutt, Nora Fatehi, Ammy Virk and Sharad Kelkar.