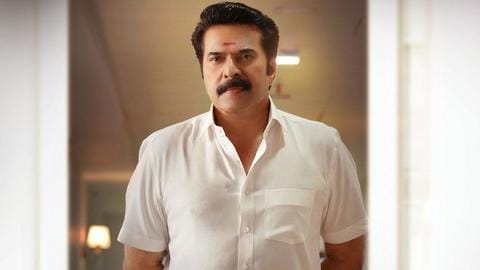 The trailer for CBI 5: The Brain is finally here! Starring Mammootty, the 2:23-minute-long video clip has a heavy dose of nostalgia. The Malayalam megastar returns as CBI officer Sethurama Iyer and thankfully has retained the character's signature walk, attire, attitude, and confident personality. Directed by K Madhu, CBI 5: The Brain is slated to hit the theaters on May 1 this year.

The trailer starts with a woman filing a case after her brother goes missing. Next, we see a series of murders. Iyer is brought aboard to solve the mystery. Though he faces challenges initially, he ultimately unravels the "basket killing." And he is "damn sure" of who the murderer is. But what stops him from nabbing the person? Let's wait and watch!

Observation
When Mammootty enters, everything else goes out of focus!

Mammootty's first appearance in the trailer comes right after a close-up shot of Jesus's statue. There are oppositions to bring him on board, but he takes them all with his ever-charming smile. When his first break-through to solve the case happens, we see the mighty star taking over the entire screen. And, what a majestic and magical presence that was!

History
A recap of the first four parts of the franchise

Mammootty, fondly called Mammukka, debuted as Iyer in 1988 in the franchise's first installment Oru CBI Diary Kurippu, and its sequel Jagratha, which hit the theaters in 1989. Sethurama Iyer CBI was the third part that came out in 2004 and then arrived the fourth installment, Nerariyan CBI in 2005. Now, we are set to witness the magic again in CBI 5: The Brain.

Updates
Where else will be see Mammootty next?

Separately, the megastar has a huge line-up of films awaiting release. This includes the upcoming thriller Puzhu, and Nanpakal Nerathu Mayakkam directed by critically acclaimed filmmaker Lijo Jose Pellissery. He is also returning to Tollywood after about three years with Agent, which will have him playing a negative role. He is also collaborating with Amal Neerad once again for Big B's sequel, Bilal.