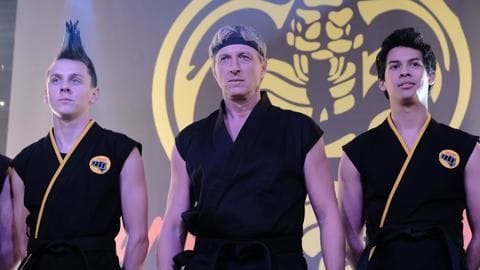 Netflix recently dropped a teaser of the much-awaited fourth season of Cobra Kai. The YouTube video is titled All Valley Karate Tournament Promo, which is "not just a tournament, it's the battle for the soul of the valley." And, Danny LaRusso-Johnny Lawrence's (Ralph Macchio and William Zabka) rivalry will also continue. Created by Josh Heald, Jon Hurwitz and Hayden Schlossberg, it premieres in December.

In this article
Promo Video

The teaser shows Macchio, Zabka, Martin Kove displaying karate skills with a voiceover saying, "Fasten your gi, tie your belt. Karate is coming to the world's biggest stage, where legends are born." Further, it gives a flashback of Lawrence-LaRusso's tournament. Returning to present, a glimpse of the Valley Karate Tournament is shown. "The soul of the valley is on the line," the narrator said.

This season will see Thomas Ian Griffith reprising his villain's role as Terry Silver from Karate Kid III. Netizens are excited about the comeback of this character and want to see him battle. After watching the teaser, a fan wrote, "I wonder how Johnny will react to meeting Terry Silver for the first time," while another comment read, "Silver tying his ponytail is everything."

The show follows what happened after The Karate Kid (1984). Originally premiered on YouTube Red (a subscription service by YouTube in 2018), it was dropped by the streamer after the third season. After a bidding war, Netflix acquired the rights and thus, the upcoming season will stream there. Cobra Kai 4 also stars Xolo Maridueña, Tanner Buchanan, Mary Mouser, Jacob Bertrand and Gianni DeCenzo.

'Stories get deeper, the characters get more complex': Macchio

S04 production wrapped up in May. Talking about what to expect, Zabka told People, "Lots of flights, lots of emotion, drama, good 80s music, and a couple beers. There's a lot of people trying to get ahead of the story, trying to figure it out, but it's pretty impossible to do." Macchio added, "The stories get deeper, and the characters get more complex."