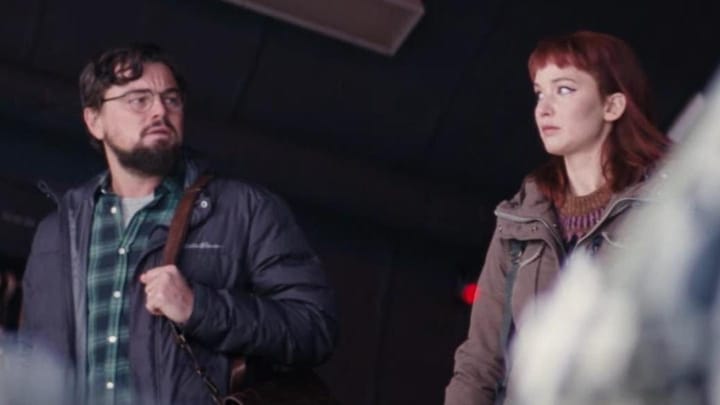 Every day, we are hearing stories of human greed and how someone is risking the extinction of ecosystems just for their monetary benefit. How far can this greed go? Oscar-winner director Adam McKay imagines an answer to this question through his dark apocalyptic comedy, Don't Look Up. The official trailer of this Netflix offering was dropped recently. Here's a breakdown of the same.

Announced in January in Netflix's 2021 line-up, the cast of the venture is glittery—with Leonardo DiCaprio, Jennifer Lawrence, Jonah Hill, Meryl Streep, Cate Blanchett, Timothee Chalamet, and Ariana Grande—leading the march. A short teaser was released earlier during the Tokyo Olympics, followed by a teaser in September. Following several month-long hush, there were rumors about the movie being a year-ender, which was confirmed soon.

Nobody is really bothered about fast approaching 'planet killer' comet

As we saw before, astronomers Dr. Randall Mindy (DiCaprio) and Dr. Kate Dibiasky (Lawrence), are losing their calm over a huge "planet killer" comet that is approaching Earth. But the who's who (of the government and press) seem least bothered with this news. Desperate, the astronomer pair take the help of social media to warn people about the impending doom. That too doesn't help.

In a biting satire, the government plots ways to earn a profit off the comet, the masses are just hyped up about yet another threat of complete wipeout, and the media is simply amused. Surely, McKay is not holding back in criticizing the lax approach of world powers while dealing with our planet's future. He is using dark comedy to put his point across.

The film is 'based on truly possible events'

If the cast list was not attractive enough, the plotline definitely will draw in the audience. We would only hope for a satisfactory (aka harsh eye-opening) ending. The Hyperobject Industries and Bluegrass Films-backed project will be getting released in select theaters on December 10. Thereafter, it will be coming to the streamer on December 24. Mark your calendars to witness the hypothetical world's end!