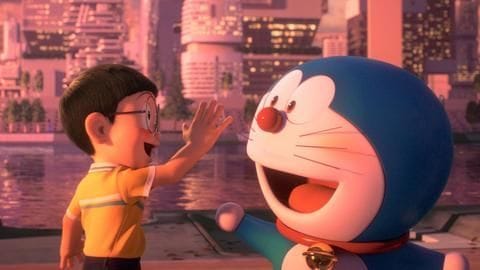 Doraemon, the Japanese manga and anime series, is a humongous hit in India. The franchise deals with an earless robotic cat (the titular character), who goes back in time from the 22nd century to aid Nobita Nobi, a boy. Its latest installment has teased a development that would make every fan of the show emotional. In it, Nobita and Shizuka get married! Crying already?

Details
The film, 'Stand By Me Doraemon 2' releases next month

The film titled Stand By Me Doraemon 2 has released in November 2020 in Japan and will have a global release in February. Different versions of the much-anticipated union have emerged online, one of which shows Shizuka and Nobita in their wedding attire, standing on the head of an emotional Doraemon. Another version shows the couple posing for the camera with friends.

About
Doraemon revolves around a robotic cat who has no ears

The manga was created by Fujiko Fujio, the pen name of a Japanese writer duo, and revolves around a robotic cat named Doraemon based in the 22nd century. The cat is sent by Sewashi from that era to his great-great-grandfather Nobita in the past in order to ensure that Nobita and Shizuka get married and the generation is therefore extended for Sewashi's birth.

Trailer
'Stand By Me Doraemon 2' starts with Nobita's grandma

You wouldn't believe your eyes if you see the trailer of the film that states that it's already the 50th anniversary of Doraemon. The trailer shows crybaby Nobita getting strengthened emotionally by his grandmother. The arguments between kid Nobita and Shizuka are flashed as Nobita's grandmother says he is going to marry Shizuka in future. That's where the adventure begins anew.

Reaction
Twitter erupts with joy as the couple ties the knot

No wonder Twitter got emotional with many '90s kids sharing how this film puts an end to their seemingly endless childhood fun. People all across the globe, especially Indian viewers who got to see the show courtesy Hungama TV, wished all the best to the fictional yet popular couple of Shizuka and Nobita. Some also said their faith in love has been restored.