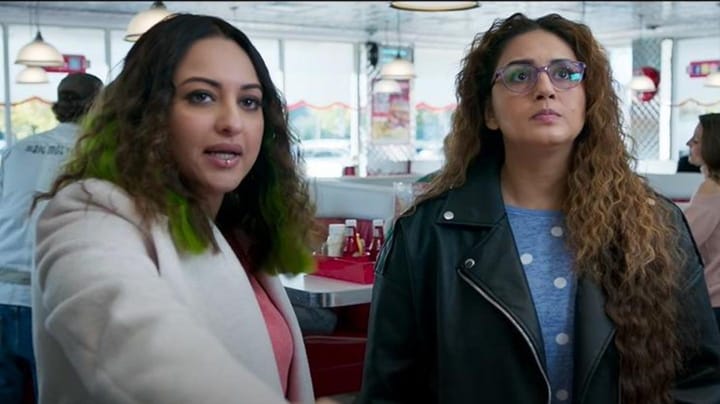 The makers of the upcoming Bollywood film Double XL have dropped its much-awaited trailer ahead of the film's theatrical premiere on November 4. Starring Huma Qureshi and Sonakshi Sinha in the lead, the film is centered around body positivity in a fun yet thoughtful manner. The trailer, which runs for over three minutes shows us some highlights of the movie, amping up our expectations.

The 3:03-minute-long trainer opens with Qureshi's Rajshree Trivedi being asked by cricketer Shikhar Dhawan to dance with him in a grand ballroom, only to realize that it was a dream as she gets woken up by her mother. The aspiring cricket presenter happens to meet Sonakshi Sinha's Saira Khanna. They instantly connect as they both face the hardships of being plus-sized women.

Tamil actor Mahat Raghavendra and Sinha's rumored boyfriend Zaheer Iqbal make brief appearances in the trailer. They form a team with the central characters and how their life changes after they meet makes up for the rest of the story.

All you need to know about 'Double XL'

According to the film's synopsis, Double XL is the story of "two plus-size women Rajshree Trivedi from Meerut and Saira Khanna from New Delhi as they navigate society's beauty standards." The Satramm Ramani directorial has its screenplay by Mudassar Aziz and Sasha Singh. Milind Jog has cranked the camera and the movie is presented by Bhushan Kumar, Wakaoo Films, and Aziz.

Earlier on Tuesday, a photo from the movie went viral on social media. The photo featured cricketer Dhawan along with Qureshi. It is reported that Dhawan will make a cameo appearance in the film and the trailer supports the report. Double XL will face a clash with two other movies (Phone Bhoot and Kuttey) that are gearing up for release on the same day.