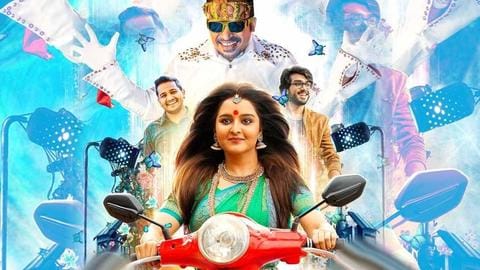 Trailer for Jack N' Jill is finally here! Starring Manju Warrier and Kalidas Jayaram, among other stellar actors, the film has been directed by Santosh Sivan. The film is gearing up for a release on May 20. Touted to be a sci-fi comedy drama, the trailer hints that the film will be much more than that. Also, watch out for Warrier's dance sequences, brilliant!

The trailer starts off with Warrier breathlessly rendering a lengthy dialogue involving Einstein's mass energy equation. We then see Jayaram explaining how he is taking over his grandfather's dream project titled Jack N' Jill, and is only waiting for a test subject to implement his invention. Soubin Shahir then enthusiastically chimes in promising to find that. What follows is a series of quirky montages.

Warrier's various avatars keep us intrigued. She rides a bike clad in a Bharatanatyam costume and donning an unkept hair. Then we see her gulping down a banana leaf full of meals. She also trashes a bunch of men effortlessly, giving a sense that the film will be in an extremely bizarre dimension. And undoubtedly, Warrier will steal the show with her charming presence.

Information
Meet the cast and crew of the film

Basil Joseph, Nedumudi Venu, Indrans, and Aju Varghese will be seen playing pivotal roles in the Malayalam film. Sivan has penned the script along with Ajil SM, while Gokulam Gopalan and M Prashant Das have bankrolled the project along with the director. Jakes Bejoy has composed the background score and Shivan has himself cranked the camera. Renjith Touchriver is the upcoming movie's editor.