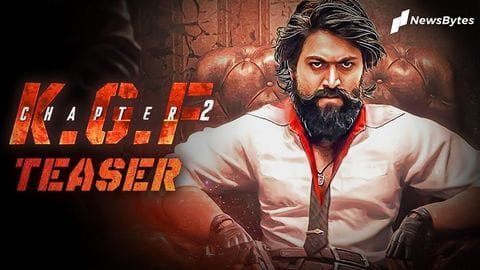 The teaser of KGF Chapter 2 dropped last night and has gone insanely viral in no time. The makers released the teaser on the eve of the film's star Yash's birthday, and it has reportedly become the fastest Indian movie teaser to cross three million likes on YouTube. KGF Chapter 2 also stars Sanjay Dutt and Raveena Tandon in pivotal roles. Here is more.

Details
The teaser promises intense war for power and position

The much-awaited KGF Chapter 2's power-packed teaser shows Yash's character single-handedly taking on his enemies. The voice-over in the teaser narrates, "History tells us that powerful people come from powerful places. History was wrong. Powerful people make places powerful." Quick glimpses of the characters played by Tandon and Dutt can also be seen in the exciting two-minute-long promo.

There is no doubt that KGF Chapter 2 is currently one of the most highly-anticipated movies. Adding to that hype, Yash had earlier said in an interview that it will be five times better than the first part. Directed by Prashanth Neel, the movie features Dutt as the antagonist, while Tandon plays the role of a powerful political leader.

Released in 2018, KGF: Chapter 1 was an instant hit. The movie revolved around Rocky's (Yash) journey as he goes on a quest for power and wealth as desired by his dying mother. The movie was loved by fans across the country, and also bagged several accolades including two National Film Awards for Best Action and Best Special Effects.