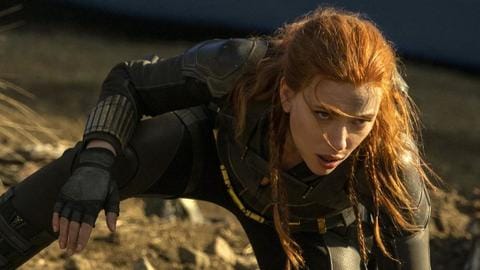 Marvel Studios has released a new teaser for the upcoming superhero flick Black Widow and we now get a better look at Taskmaster, the antagonist in the movie. The 30-second clip focuses on his abilities and some hardcore action scenes. This is presumably the last teaser/trailer for the first film in Phase Four of the Marvel Cinematic Universe ahead of its July 9 release.

Teaser
The mysterious Taskmaster 'controls a whole army of Widows'

The clip, titled Control, begins with Natasha Romanoff aka Black Widow (Scarlett Johansson) getting thrashed by Taskmaster and asking her sister Yelena (Florence Pugh) about the masked man's identity. "He can mimic anyone he's ever seen," says Yelena, adding that he "controls a whole army of Widows." We also get a glimpse of Alexei Shostakov or Red Guardian (David Harbour) fighting with Taskmaster.

Mystery
The identity of the actor playing Taskmaster has been guarded

This clip definitely gives us an idea about what Natasha will be standing against in her solo movie. Taskmaster, whose identity has been strictly kept under wraps, can not only pull every move that his opponent does but also has a full-fledged force of Black Widows operating under his instructions. Marvel has consciously chosen not to mention the actor's name in the past.

Information
This is what the comics say about Taskmaster

What do the comics tell us about the character? Taskmaster, or Tony Masters, is born with an ability that empowers him to replicate observed action. A skilled tactician adept at martial arts, sometimes government-sanctioned, he trains thugs for criminal organizations. While the MCU doesn't always follow the comics completely, the above-mentioned skills are likely to be retained in the movie.

Confirmation?
Johansson hinted at her exit from the MCU recently

The events in Black Widow take place after Captain America: Civil War when Romanoff returns to her home in Russia. The Avenger is very much dead in the current timeline, and it looks like Johansson is truly stepping away from the role. In a recent interview, the star said, "It feels great to leave a party when it's still raging."

Quote
'If you love something, you need to set it free'

"I feel really happy with the work that we've done for this decade of time and, you know, it's bittersweet to say, 'Goodbye,' but if you love something, you need to set it free!" said Johansson, who entered MCU with Iron Man 2 in 2010.