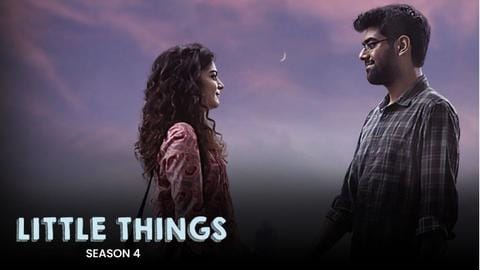 Netflix dropped the trailer of its hit Indian series Little Things 4, which will be the final outing for the internet's favorite millennial couple, Dhruv and Kavya. As the pair navigates through health, family, commitment, and their future, the last season also promises serene trips and a lot of heartfelt one-to-one. This series premieres on the platform on October 15. Here's a trailer breakdown.

Will Dhruv and Kavya be able to 'take the plunge'?

We saw Dhruv (Dhruv Sehgal) and Kavya (Mithila Palkar) cohabiting and working a long-distance relationship through the past three seasons. Now, will we see them "take the plunge"? This plunge could mean marriage, at least that's what Dhruv seems to want in the trailer. He asks Kavya whether she wants to build a future together. She reveals she's not certain of that commitment yet.

Build-up to marriage has been in making for a while

To recall, in the last season too, Dhruv had an actual nightmare where Kavya got married to someone else. So it's safe to assume that marriage is the next step the male lead wants in his relationship. Again, judging by the previous seasons, we have seen Kavya feeling bad about not doing enough for her aging parents. And her hesitance is equally justified.

"They fight and figure things out," but will they be able to enjoy the little things? Be it missing to book at their favorite restaurant or having a huge fight, Momo and Biryani Monster have always come through. We hope they will do the same this time too. Directed by Ruchir Arun and Pranjal Dua, this show is the longest-running Netflix India series.

'You' season three drops on Netflix the same day

Initially released by Dice Media on YouTube in 2016, the giant streamer acquired the rights later - its season two came out in 2018 and season three dropped in November 2019. Notably, a new season of another popular series, You, is dropping on the platform on the same day. Although these cater to different audiences, it will be an exciting day for entertainment lovers.

Who is Vishal Garg, who fired 900 employees over Zoom?

The Ashes: How have England performed in Australia?

Why did a Rajasthan-based lawyer file complaint against Katrina-Vicky Kaushal?