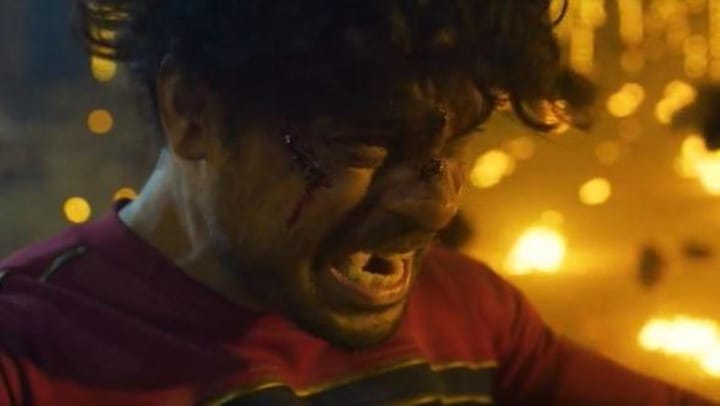 The makers of Tovino Thomas's Minnal Murali dropped a bonus trailer today. While the first trailer had given us glimpses of the actor's fun adventure after discovering his superpowers, the latest one reveals the intense side of his character. Said to be the first Malayalam superhero flick, Minnal Murali has been directed by Basil Joseph. It's set to stream on Netflix from December 24.

Like the first one, this trailer too shows Thomas's avatar as a superhero but this one is much different from the earlier clip. In that video, Thomas discovers his superpowers and experiments with them along with a little girl. So, it was basically fun. Whereas, this one talks business and shows a devastated neighborhood after a fire accident, and how Thomas handles the situation.

Check out the trailer here

Both the trailers, put together, almost reveal the story

The first trailer had shown us how Thomas acquired his superpowers after being struck by lightning. This new clip narrates the damage after a massive fire accident. Though we don't know the reason behind the inferno, we believe that it may have been caused by Thomas's character himself while experimenting with his powers. Hence, he mans up and takes full responsibility.

'Minnal Murali' is backed by a talented cast and crew

Femina George, Guru Somasundaram, Harisree Ashokan, and Aju Varghese will be playing pivotal roles in Minnal Murali. The film will also be streamed in Hindi, English, Telugu, Kannada, and Tamil, apart from Malayalam. As far as the technical team is concerned, the story has been written by Arun Anirudhan and Justin Mathew, while Sameer Thahir has cranked the camera. Shaan Rahman composed the music.