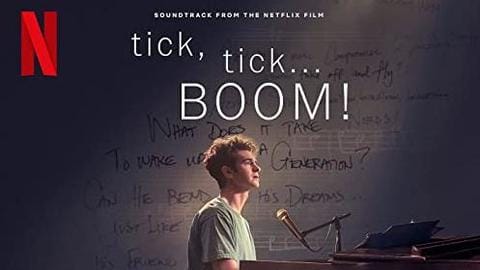 Netflix dropped the full trailer of tick, tick... BOOM! recently and we have a film about musical greatness in our hands. Based on the famous musical by composer Jonathan Larson by the same name, the movie adaptation is an autobiographical musical featuring Andrew Garfield as Larson. In it, we will see his struggle with writing the legendary piece Rent. Here's a trailer breakdown.

Trailer
Working at diner, Larson is dreaming about his masterpiece

We meet Larson at various phases of his life as he tries to write the perfect musical that will stamp his footing in the world of musicals. But before that happens, he has to conquer his day job at a diner, existential crisis, the need to excel, and love. Larson finds support in his girlfriend Susan (Alexandra Shipp) and friend Michael (Robin de Jesús).

Carpe diem
'What do we do with the time we have'

From the trailer, we get the message that director Lin-Manuel Miranda (who rose to global recognition for Hamilton) is trying to essay. Our protagonist is due to showcase his fruit of labor in a few days and that is when pressure surrounds him from all quarters. While time is ticking, he is left to ask, "What do we do with the time we have?"

Sadly, in real life, Larson was not able to witness the success of his greatest work, Rent. As per reports, the composer had passed away on the morning of Rent's first Off Broadway preview at 35. Miranda has publicly spoken about being a fan of not only Rent but also tick, tick...BOOM! so we can expect his feature directorial debut will not disappoint.

Movie
Miranda unveiled first track, '30/90,' from the movie too

Ahead of the trailer release, Miranda dropped the opening track of the movie, titled 30/90. The song has been sung by Garfield and it features additional vocals by Joshua Henry, Vanessa Hudgens, Mj Rodriguez, Shipp, and de Jesús. Steven Levenson has penned the screenplay, which is based on Larson's original musical. It drops at select theaters and on Netflix on November 19.