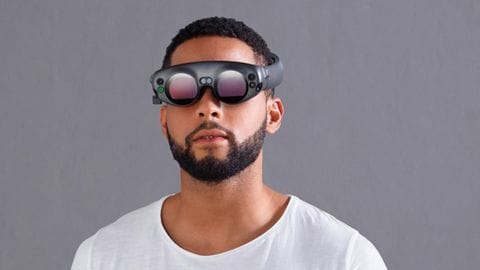 After working in near-total secrecy for seven years, mixed reality headgear maker Magic Leap has finally started shipping its first product, the Magic Leap One Creator Edition. However, don't get too excited - the developer-focused mixed reality headset costs more than two iPhone Xs and has been priced at a whopping $2,295. It's only available in USA. What warrants such a price? We explore.

Here we go. Magic Leap One Creator Edition is now available to purchase. So if you’re a #developer, creator or explorer, join us as we venture deeper into the world of #spatialcomputing. Take the leap at https://t.co/8HbsM1yNQo #FreeYourMind pic.twitter.com/mpEqNFltlo

The package
What Magic Leap offers for $2,295

The Magic Leap One Creator Edition comes with the headgear and supporting software that allows users to add layers of computer-generated imagery and applications to real, three-dimensional spaces around them. Additionally, the package also comes with its own web browser and social media platform that lets Magic Leap users interact with each other. Notably, the 'Pro' version costs an additional $495.

The hardware itself consists of a headgear attached to small, wearable computer which houses the processors and graphics units required to run it. Additionally, the headgear also comes with a sort of controller that can be used in mixed reality mode to play games, control apps etc. Hands-on reviewers described the headset as comfortable, and said that some apps didn't even require the controller.

The wearable computer powering Magic Leap One runs on an NVIDIA Tegra X2 SoC that combines CPU and GPU functions. Further, it has 8GB RAM (4GB available for apps), 128GB storage, Bluetooth and Wi-Fi connectivity, and a 3.5mm headphone jack.

This is where it gets tough. Magic Leap did not allow hands-on reviewers to record what they saw through the headset, but glitches and the narrow field-of-vision apart, reviewers seemed pretty impressed. They described being able to see common programs like email and videos "float" around real rooms. Additionally, they were able to create custom environments, play shooting games etc.

Availability
Magic Leap One is only available in six cities

According to CNET, Magic Leap One is only available in Chicago, Los Angeles, Miami, New York, San Francisco (Bay Area), and Seattle as of now. Additionally, Magic Leap is delivering the device via a service called LiftOff, that will see technicians personally deliver and set up the device for you in-house, to make sure that it's a perfect fit for your home.

Magic Leap
Magic Leap has raised over $2.3bn in funding

Founded in 2010, Magic Leap has raised at least $2.3bn in funding from big backers like Google and JPMorgan. Last month, AT&T also took an interest in Magic Leap, and bought a stake in it, taking the company's valuation to $6.3bn. While reviewers have said that it's the most complete AR device yet, there remains plenty of room for improvement.