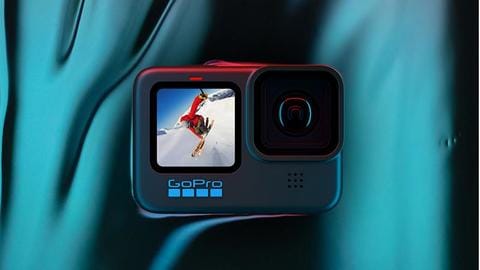 GoPro has launched its latest action camera, the HERO10 Black, in India. It carries a price-tag of Rs. 54,500 in the country and comes with a new GP2 processor which delivers 2x faster video frame rates and better video stabilization. The camera offers up to 5.3K video recording, 23MP photos with improved low-light performance, and automatic cloud upload feature. Here's our roundup.

Design and display
The camera is equipped with two displays

The GoPro HERO10 Black sports a front-facing LCD screen for live previews and a second touchscreen display on the back. It has three microphones with advanced wind noise reduction feature, built-in folding mounting fingers for attaching the camera to compatible mounts. The camera supports voice control in 11 languages and offers up to 33 feet of water resistance.

Camera stuff
You can grab up to 19.6MP stills from a video

The GoPro HERO10 Black is capable of shooting 23MP photos. You can also grab up to 19.6MP stills from a video. It can record up to 5.3K videos at 60fps, 4K videos at 120fps, and 2.7K videos at 240fps. The action camera provides features like Local Tone Mapping, 3D Noise Reduction, TimeWarp 3.0, and 1080p WebCam mode with live streaming option.

In India, the GoPro HERO10 Black is priced at Rs. 54,500. It will be available for purchase in early November via Amazon, Flipkart, and other leading retailers. In the US, it costs $399.98 (around Rs. 29,400) including one-year GoPro Subscription.