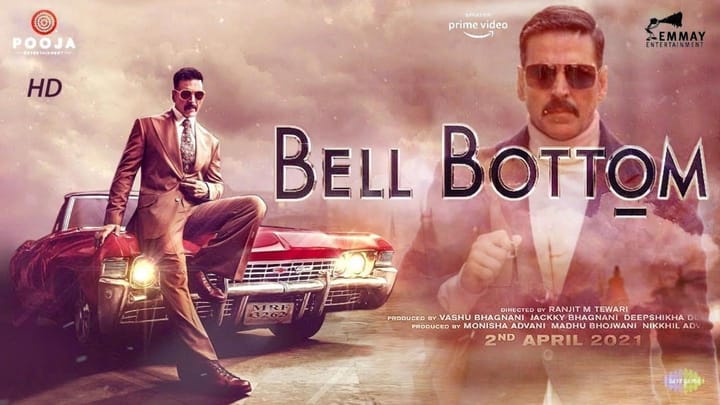 After a long wait, Akshay Kumar finally dropped the trailer of Bell Bottom. The team launched it at PVR Priya, Delhi, the birth place of PVR multiplexes. The trailer boasts of great action sequences and goes on to show the different characters the actors are going to play. Also, the storyline might be different, but Kumar appears in his usual national hero personality.

In the trailer, we see an Indian airplane getting hijacked. Taking action, the then PM (Indira Gandhi) hires a R&AW agent, Bell Bottom, to rescue the passengers. Enters a well-suited, bike riding Kumar. He begins a covert operation, in which he sends five fake hijackers and also, plans to involve the Indian Army. In the end, we see him getting engaged in high-octane action.

When you watch the trailer, you will find some similarities with Ajay Devgn's upcoming flick — Bhuj: The Pride of India. While both the movies are set in different situations, they have the same PM and similar background of patriotism. However, all the actors in the Devgn-multi starrer have been given importance, but in Bell Bottom, it's just Kumar — nothing out of ordinary.

Check out the official synopsis of 'Bell Bottom'

"Amongst multiple heinous airplane hijacks, India was made to face another such challenge in 1984. Bell Bottom, a RAW agent played by Kumar sees through the plan and thus, begins India's first covert operation (sic)," reads the official synopsis of the movie.

Movie is set to arrive in 3D as well

Yesterday, Kumar shared a promotional-clip on his Twitter handle to announce that the film will now arrive in 3D as well. This is the first big movie to release in theaters after a long time, so watching Kumar doing action sequences wearing those 3D glasses will surely give a top-notch visual experience. Plus, it might bring huge profits to cinema hall owners and distributors.

'Bell Bottom' to hit the screens on August 19

The movie was initially supposed to release on July 27. In fact, there were talks of releasing the flick on an OTT platform, but now, it is slated to hit the big screens on August 19. Directed by Ranjit M Tewari, Bell Bottom has been produced by Vashu and Jackky Bhagnani. It also stars Huma Qureshi, Vaani Kapoor, and Lara Dutta in pivotal roles.

You know you have become an emotionally mature person when... Relationships
WhatsApp will soon let you share images in original quality WhatsApp
25 years of 'CID': Decoding what made it a phenomenon Sony TV
EU regulator fines Meta again; this time for WhatsApp Meta