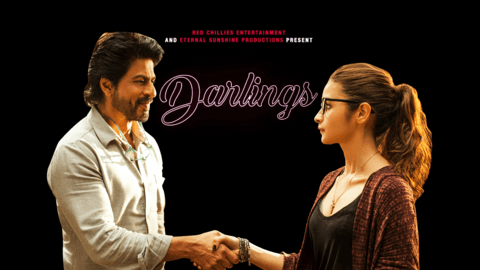 After announcing her production company 'Eternal Sunshine Productions,' Bollywood actor Alia Bhatt on Monday revealed the first project to be bankrolled by her. She has teamed up with Shah Rukh Khan's Red Chillies Entertainment for a movie titled Darlings. The movie also features actors Shefali Shah, Vijay Varma, and Roshan Matthew and is directed by debutante Jasmeet K Reen. Here's more.

Really excited to be a part of 'Darlings': Bhatt

Reportedly, the film revolves around a quirky mother-daughter duo facing unusual circumstances. "I am really excited to be part of Darlings; it's a powerful story with a lot of humor and doses of dark comedy. I am thrilled to have Darlings as my first film as a producer, that too in collaboration with my favorite, Shah Rukh Khan and Red Chillies," Bhatt said.

The announcement was accompanied with a warning

This one is special, said Bhatt

This one's special! 😊♥️
Announcing #Darlings, my first ever production under @EternalSunProd, in association with my fav @iamsrk’s @RedChilliesEnt!

SRK and Bhatt first came together for 'Dear Zindagi'

This isn't the first time that Bhatt and Khan have joined hands for a project. They had earlier come together for Gauri Shinde's Dear Zindagi and were loved by the audience. In the movie, Khan played the role of a psychiatrist, and Bhatt was seen as a budding cinematographer, struggling with mental health problems. It became one of the most successful movies of 2016.

With her exceptional performances, Bhatt has shown that she is one of the most bankable actresses in the Hindi film industry. In her upcoming movie Gangubai Kathiawadi, she will be seen as a brothel queen. The story is inspired by a character of Hussain Zaidi's book. The film is slated for a release on July 30 and is directed by Sanjay Leela Bhansali.

Did you notice: SRK hasn't posted anything online for 3-months?

'Gangubai Kathiawadi' only Indian film to premiere at Berlin Film-Festival

When is 'RRR' hitting OTT platforms after its theatrical run?

'RRR' trailer: Thank you Rajamouli, the wait was worth it

Kartik Aryan, Kriti Sanon's next 'Shehzada' to have Pritam's music?

Is Alia Bhatt charging more than Telugu actresses for 'RRR'?