'Cinema Bandi' trailer: You will find yourself laughing throughout 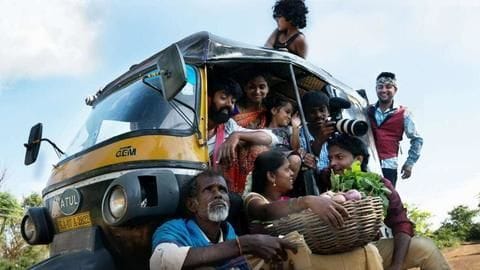 Movies are made to fulfill varied ambitions, be it pure entertainment, supporting a cause, or simply telling a story. Director-producer duo Raj and DK's upcoming Netflix venture, Cinema Bandi is a mix of all three, as understood from its recently-released trailer. You laugh out loud and yet pause to think. Perhaps, the innocence that every character embodies draws viewers the most.

The trailer poignantly sets the stage as we come across an auto-rickshaw driver who finds an expensive camera in the back seat. He decides to shoot a movie of his own by casting people from his small village. What ensues is a heart-warming, funny montage of things going wrong in the most hilarious of ways. But the goal behind the endeavor is serious.

Deep message
Everyone is a filmmaker at heart, the trailer points out

The villagers dream big and wish to bring a 24/7 power supply and install bore wells from the success of their movie. While none of them are trained to helm a film, the trailer shows it really does not matter because "everyone is a filmmaker at heart." The YouTube description rightly says, "There's more story behind the scenes than what meets the eye on-screen."

Popular Telugu actress Samantha Akkineni took to her social media handle to praise the trailer. Addressing Raj and DK, the Majili actress wrote, "This looks so honest.. in the midst of all the chaos this trailer made me smile... Thank you." She also wished the entire team good luck. Notably, Akkineni will be seen in the filmmaker duo's The Family Man 2 soon.

Details
Raj and DK called it a 'sweet little film'

Directed by Praveen Kandregula, Cinema Bandi has been made under Raj and DK's D2R Films banner. Sharing the trailer, they said it was a "sweet little film with loads of humor and a huge heart!" We will be able to see if the power of jugaad and innocent dreams help the protagonists complete their film, when it releases on Netflix on May 14.

Presenting the trailer of CINEMA BANDI — an independent film made under #D2Rindie. A sweet little film — about making a film — with loads of humour and a huge heart!https://t.co/NWPL1Az7Fv