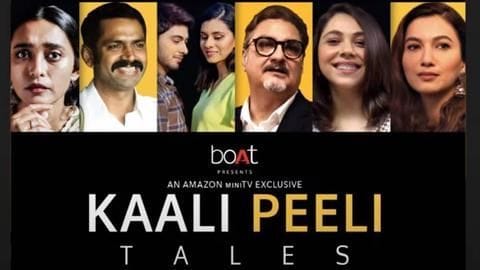 Amazon miniTV has just dropped a trailer of an anthology movie, Kaali Peeli Tales, on YouTube. Directed by Adeeb Rais, it deals with six interesting stories about "unconditional love and support" and the title, which represents Mumbai's taxi, is going to be a common factor across all these tales. With talented actors in place, this flick will take "a unique perspective on modern-day relationships."

As the movie's description reads, it is based on the themes of romance, marriage, infidelity, homosexuality, forgiveness and divorce. And, the trailer gives a glimpse of each theme. While a father has an issue, even before meeting her daughter's boyfriend, because he is "vegetarian Punjabi," a married boss is in love with her attractive gay employee. The video showed different forms of modern love.

Gauahar Khan, Vinay Pathak, Sayani Gupta are among the cast

All the titles of this anthology have also been revealed in the trailer. The movie will probably begin with Single Jhumka that stars Sayani Gupta, followed by a middle-aged love story Fish Fry Aur Coffee and Gauahar Khan's Loose Ends. The next three include a young couple's romantic comedy drama titled Love In Tadoba, Soni Razdan-Vinay Pathak's Harra Bharra and Maanvi Gagroo-starrer Marriage 2.0.

This anthology is slated to release on August 20

It also stars other talented actors, such as Sharib Hashmi, Hussain Dalal, Priyanshu Painyuli, Sadiya Siddiqui, Tanmay Dhanania, Adeeb Rais, Varun Tewari and Mrinmayee Godbole among others. All the performers who appeared in the trailer are outstanding, making fans eager to watch this upcoming flick. Kaali Peepi Tales is slated to premiere on August 20 for free on Amazon miniTV on Amazon Shopping App.

Anthology is the new trend on OTT platforms

Most of the digital platforms are currently investing in anthology movies and series. Recently, the most hyped Netflix project was Mani Ratnam's Navarasa and earlier, the streaming giant had premiered Manoj Bajpayee-starrer Ray and Radhika Madan's Feels Like Ishq. And Amazon Prime Video has just released the second season of its anthology, Modern Love. Interestingly, this series has similar themes to Kaali Peeli Tales.