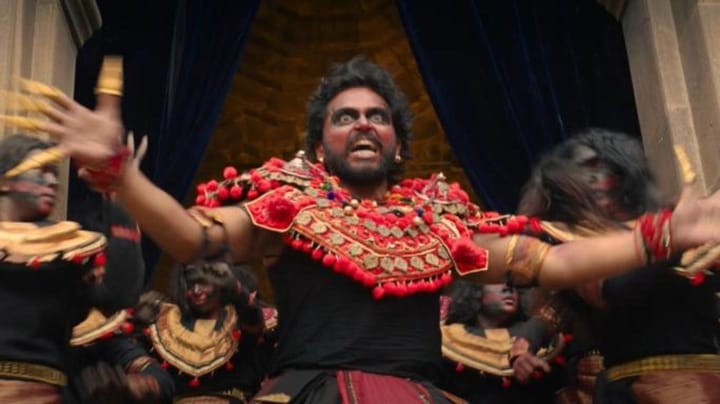 The most-awaited trailer and audio tracks of Mani Ratnam's Ponniyin Selvan-I were launched on Tuesday. The star-studded launch event saw the attendance of celebrities like Rajinikanth, Kamal Haasan, and director Shankar among the cast and crew of the historical drama. The film is set to hit the theaters on September 30 amidst huge expectations. Read on to know the highlights of the trailer.

The 3:23-minute-long trailer starts with Haasan's voice introducing us to the events that unfolded 1,000 years back. His intense voice explains the fall of a comet that predicted a devastating loss of the Chola kingdom. The trailer then takes us to breathtaking views of various parts of the kingdom like the palace and a fleet of ships and introduces the main characters.

Roles of lead actors get introduced

Roles of lead actors: Aishwarya Rai Bachchan, Trisha, "Jayam" Ravi, "Chiyaan" Vikram, and Karthi were introduced with them delivering a few dialogues. We could also see the other important characters played by Parthiban, Jayaram, Prabhu, and Prakash Raj also making brief appearances in the trailer. In the end, we are told that war, vengeance, and plotting are going to endanger the Chola kingdom.

The background score of AR Rahman induces goosebumps. The background music for portions where Karthi's Vanthiyathevan gets caught in between a dance troupe and where he gets cornered by armed warriors elevate the mood further. But it was disappointing to not see the other characters like Poonguzhali and Vaanadhi, who play major roles in the novel that the film is based on.

All you need to know about 'Ponniyin Selvan-I'

The Ponniyin Selvan franchise is based on the Tamil novel by Kalki. It follows the lives of Chola kings and queens, and how they overcome the vengeful plotting of a Pandiya queen to destroy the kingdom. Besides the aforementioned actors, the film also features an ensemble of acclaimed stars like Vikram Prabhu, Aishwarya Lekshmi, Sobhita Dhulipala, Rahman, Lal, Riyaz Khan, etc.

Poll
Which character of 'Ponniyin Selvan-I' do you want to know about?
Nandini
44.62%
Vanthiyathevan
55.38%
Poll is completed
Here's everything to know about the role played by Rai Bachchan

Here's everything to know about the role played by Karthi