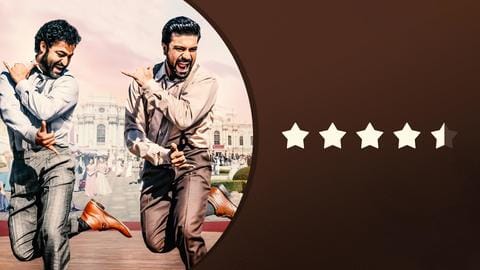 By dropping glimpses and teasers, makers of the upcoming magnum opus RRR have kept their fans excited and updated to the core. The anticipation increased further after the team released a new song, which they described as the "mass anthem." Titled Naatu Naatu, the song, set in the pre-independence era, shows Jr. NTR and Ram Charan in dapper formals. Here's our review.

Both Charan and Jr. NTR command huge following; fans are crazy over their dancing skills. Naatu Naatu will strike a chord with them there. Whatever we could see of the two Telugu stars, they dance like there is no tomorrow. Their synchronized steps set the floor on fire. Cuts focusing on the movements of their hands and legs add value to the video.

Information
The visual appeal this song offers will stun you

The magnificent palace in the backdrop goes on to show the visual appeal Naatu Naatu is going to offer us. This MM Keeravani-composition sounds pretty traditional. Voices of Rahul Sipligunj and Kaala Bhairava give a different spin to the words by Chandrabose. Their bold rendition add more energy to this already spirited and bubbly number. The track maintains same tempo and bounce throughout.

Verdict
The film is set to release next year in January

In one scene, we see Charan, all sweating, sitting in front of a fan. So just imagine the dance moves he's going to execute in the song. Verdict: As a whole, it bags 4.5. The film also features Alia Bhatt as Charan's romantic interest, while Ajay Devgn will be seen in a pivotal role. RRR is set to hit the screens on January 7.

Updates
Did you watch the 'RRR Glimpse' dropped earlier this month?

Earlier this month, makers had dropped a short clip that had some high-quality close-up scenes along with goosebumps-inducing battle sequences. Tagged as RRR Glimpse, the 45-second-long clip looked a great fit as a teaser. Apart from the eye-catching effects like a stream of blood flowing down Jr. NTR's face or an animated tiger lurching toward the screen, the video also had great background score.