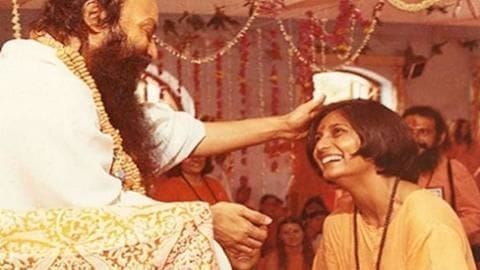 The Netflix documentary on Ma Anand Sheela, Searching For Sheela, the former personal assistant of self-styled godman Bhagwan Rajneesh (Osho) is all set to drop later this month. Meanwhile, the makers have released its trailer today. The documentary captures the infamous personality when she returned to India after 34 years and how she interacted with the press. Let's break the trailer down for you.

Her fallout with Osho is also highlighted in the trailer

The trailer opens with a clip of Osho saying, "People who don't commit crimes do not escape like that," and we're promised a close retelling of Sheela's initial escape and eventual arrest on grounds of Rajneesh's accusations in the 1984 Oregon bioterrorist attacks. Then, the trailer features several moments from Sheela's life, from being Osho's right hand, to being accused of wire-tapping and arson.

She'd pleaded guilty for her association with Oregon bioterrorism attacks

For the unversed, Sheela was the godman's personal secretary from 1981-1985 and used to administer the Rajneeshpuram ashram in Oregon, United States. However, she was embroiled in what's considered to be the largest bioterrorism attack in US' history and fled to Europe in 1985. Soon, she was arrested and she'd ultimately plead guilty to the charges of arson, wiretapping, attempted murder, and mass poisonings.

'Wild Wild Country' brought her back to the limelight

While she was sentenced to 20 years of prison, Sheela was paroled after 39 months. After this, she moved to Switzerland. She now runs homes for the mentally ill, disabled, and elderly, something that also gets captured in the Netflix trailer. Before this, Sheela had been the subject of Netflix's 2018 documentary series Wild Wild Country, which effectively brought her back to the limelight.

Priyanka Chopra to portray Sheela in an Amazon film soon

Netflix had announced this documentary in 2019 with Karan Johar's Dharmatic Entertainment bankrolling the project. Incidentally, Johar had interviewed Sheela that year at an event in India, parts of which will be included in the production. Separately, Priyanka Chopra Jonas is also set to play Sheela in the feature film version of Wild Wild Country. Barry Levinson is helming the Amazon project.

The documentary can be streamed on Netflix on April 22

The description of the trailer says that Searching for Sheela will give "an intimate look into her journey across India," with "audiences unable to decide if they deem her a criminal or remain in awe of her badass secretary days." It will drop on April 22.

I worked for a mad man, says Ma Anand Sheela

After 'Inshallah' got shelved, Alia suffered maximum loss: Here's how

Is Aamir Khan planning to quit acting? Here's the truth