'Om: The Battle Within' trailer: Get ready for heavy-duty action 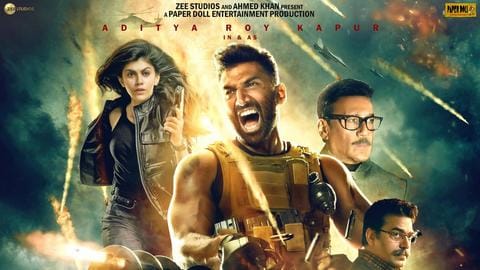 The trailer for the upcoming actioner Om: The Battle Within is finally here! Featuring a never-seen-before "all muscles and frowns" avatar of lead star Aditya Roy Kapur, the trailer promises a lot of action, massive explosions, and a twisted backstory that needs solving. Directed by Kapil Verma, the pure action drama is headed for a July 1 theatrical release. Here's a trailer breakdown.

Context
Why does this story matter?
Trailer
We get elements of hidden identity, memory loss, mystery

In the nearly three-minute clip, we get a look at para commando officer Om (Roy Kapur), the incident because of which he lost his memories, and "the biggest mission" of his life. Om's father turns out to be nuclear scientist Dev Rathore (Jackie Shroff) who is alleged to have betrayed the nation somehow. Now, Om must save his father and prove him innocent.

We also get a good look at Sanjana Sanghi's superspy avatar. While she does get a few action shots, the film is solely about Om's massive strength and patriotism. Giving a solid challenge to Marvel's Captain America, Om pulls down a helicopter and crashes it with his bare hands! So, we can safely assume that action lovers are going to love the upcoming production.

Apart from those already mentioned, the Hindi film will also star Ashutosh Rana, Prakash Raj, and Prachee Shah. Going by the trailer, there will be a lot of mind-bending thriller elements in the film. But all we hope for is a decent story to support all the heavy-duty action. Om: The Battle Within has been produced by ZEE Studios, Ahmed Khan, and Shaira Khan.