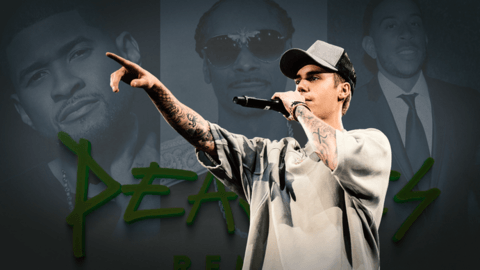 Justin Bieber has dropped the remix audio of his song Peaches, featuring Ludacris, Usher and Snoop Dogg, on his YouTube channel. It has new rap lyrics given by these three renowned names in the music industry, interspersed with the original hook line in Bieber's voice. Unsurprisingly, the remix has reached over 4 lakh views, within a few hours of its release. Here's our review.

Review
The remix sounds fresh; will appeal to fans

The remix will appeal to fans of both Bieber and his collaborators. The new lyrics are mouthed as rap, and not set to the music of the song, which makes it fresh and different. They seem somewhat disjointed though. Bieber lets his guest collaborators take the center stage, while also being the connecting factor to the original, and playing on its peppy appeal.

The track is getting mostly positive comments from their fans online, with many reiterating Ed Sheeran's comment, "Justin Bieber's voice makes everything better." Some said, "the remix we didn't know we needed," while another highlighted, "What JB does only JB can do it...He's the legend in the music industry." Many users praised previous collaborations between the artists, and demanded a whole new album!

The original song by Bieber, featuring Daniel Caesar and Giveon, released in March this year, and became an international hit almost overnight. The video currently has over 260 million views on YouTube. It is a part of Bieber's sixth studio album Justice. The song, a perfect mix of pop and R&B, has foot thumping beats, paired with funky lyrics that appeal to young listeners.

To note, Bieber has collaborated with both Ludacris and Usher before. His first breakthrough hit Baby (2010), which has over 2bn views on YouTube, featured Ludacris. They again collaborated for All Around The World in 2013, which was another massive hit. Meanwhile, Usher has been a mentor of sorts to the young singer, and collaborated with him for Somebody To Love remix in 2010.