'Rana Naidu': Everything to know about Venkatesh-Rana Daggubati starrer 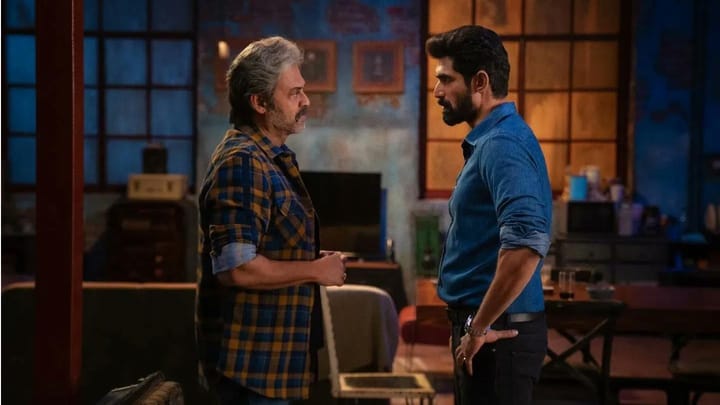 It's finally happening! Nothing could excite Tollywood fans more than Netflix India's announcement about its upcoming web series, Rana Naidu, at the TUDUM: India event on Saturday. The project will see Telugu star Venkatesh Daggubati and his nephew Rana Daggubati come together for the first time on screen. Netflix also revealed its teaser at the event. Here's everything to know about Rana Naidu.

What is the story of 'Rana Naidu' all about?

An adaptation of the American series Ray Donovan, Rana Naidu will have Venkatesh and Rana playing a father-son duo who are reportedly undercover criminals in Mumbai. The makers said it is packed with action and thrill. The official synopsis read, "This taut drama unfolds when his [Rana's] father...is unexpectedly released from prison, setting off a chain of events that shakes the Naidu family."

What does the teaser show?

The 57-second-long teaser establishes Rana as a "celebrity fixer" as he thrashes a man to a pulp. After an intense car chase, Venkatesh is introduced as Rana's estranged father. He's seen in a rugged avatar with an unkempt beard and overgrown hair. Venkatesh then gets released from prison after which the father-son duo has a goosebump-inducing faceoff with each other toward the teaser's end.

Here's what the makers say about the series

Talking about the series, the makers said, "Rana Naidu is a series that combines heart-pounding action with heartfelt drama." "Rana, a celebrity fixer, and Naga (Venkatesh), his estranged father, come together onscreen for the first time and pack each episode with both chemistry and kinetic energy that will have you on the edge of your seats throughout (sic)," they added.

Meet the cast of 'Rana Naidu'

Karan Anshuman and Suparn Varma have directed Rana Naidu, while Zessica Harison, Surveen Chawla, and Sushant Singh, among others, play key supporting roles. The makers have, however, not yet announced its release date or the number of episodes in the Rana-Venkatesh starrer. There is also no clarity on whether it is a limited series.