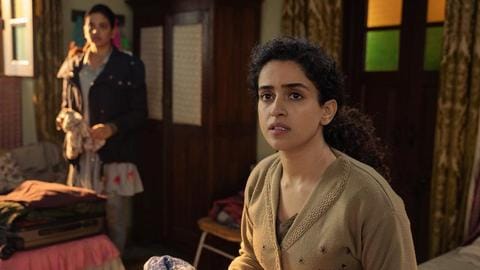 Having made her impact in the Bollywood industry with versatile roles, Sanya Malhotra is all set to feature in a new Netflix film titled Pagglait. She portrays the role of a young widow, named Sandhya, who stays unperturbed by her husband's death. The movie's premise looks promising as it isn't easy to humorously celebrate a tragedy. Let's decode the teaser.

Plot
After death of son, family slipped into sorrow

The official teaser shows a middle-class family, residing in a small Indian town, mourning the loss of their young son. Sandhya, now a widow, is shown struggling as she can't express grief over her husband's sudden death. While her brother-in-law gets tonsured, Sandhya remains calm and composed, reflecting no sorrow. The movie will release on March 26.

Details
Sandhya recalled how her cat's death affected her

The teaser explained that Sandhya's husband died just five months after the wedding. When asked why she isn't crying, Sandhya tells her friend about her dead cat. The protagonist said she remained inconsolable for days but isn't feeling the same right now. The quirky comedy is directed by Umesh Bist. It also stars Shrutii Sharma, Ashutosh Rana, and Raghubir Yadav in pivotal roles.

Quote
The character is different from what I have played: Malhotra

Incidentally, the teaser of the movie released on Malhotra's birthday today. "So thrilled to announce this film which is very close to my heart on my special day. I essay the role of Sandhya, a character very different from what I have previously portrayed on-screen, (sic)" she said in a statement. She was last seen in Anurag Basu's much-loved film Ludo.

Comedy
Malhotra has been entertaining fans with her hilarious Instagram posts

Though Malhotra hasn't done a full-fledged comedy movie yet, her posts on social media managed to make people laugh. She showed no qualms in hopping on viral trends like "Rasode me kaun tha." Once talking about her career, Malhotra had said she doesn't want to restrict herself to boxes. "I want to do a dance film, a comedy film," she had said.

Quote
She is willing to do movies that are demanding

"I want to do work that will require me to prepare a lot for a particular role. I want to do films that will put me in an uncomfortable zone, and push me to work hard for it," she had added.