'The Girl On The Train' teaser shows Parineeti's intense avatar 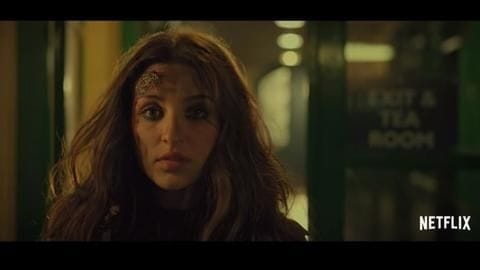 Parineeti Chopra's upcoming Netflix film The Girl On The Train's teaser is now out. The intense teaser of the film shows the actor trapped in a dreadful situation. Sharing the teaser, Netflix India wrote, "Join @parineetichopra on a train journey like never before (sic)," while tagging the star cast of the movie, that is based on Paula Hawkins's thriller novel. Here is more.

The teaser of the movie is pretty dark and intense. Chopra, who has thus far played several joyful characters on the screen, can be seen donning a bold look in this intriguing murder mystery. Throughout the 20-second-long promo clip, Chopra's mysterious character can be seen in a panicked, bruised and dishevelled state. The movie is set in London.

Film
It will be out on February 26

The Girl On The Train, that has been directed by Ribhu Dasgupta, will be released on the streaming platform Netflix on February 26, 2021. It is the Hindi remake of a 2016 Hollywood movie that was based on a novel by the same name. Apart from Chopra, the movie will also feature Aditi Rao Hydari, Kirti Kulhari and Avinash Tiwary in pivotal roles.

Information
What is the story of the movie?

The story of the movie revolves around the life of a curious divorced woman, who fixates on the lives of a couple she sees on the train and eventually gets embroiled in a murder mystery that unfolds truths from her own past.

Quote
It's a privilege for me to play the character: Chopra

Chopra, who was last seen in Jabariya Jodi, was thrilled to step into the shoes of actor Emily Blunt for The Girl On The Train. She had said in a statement, "Emily Blunt's performance in The Girl on the Train had blown my mind and it is a privilege for me to play the character that she has essayed so brilliantly on screen (sic)."

Information
Other upcoming releases on Netflix

Apart from The Girl On The Train, Netflix has several other exciting projects coming up. Renuka Shahane-directorial Tribhanga starring Kajol, Tanvi Azmi and Mithila Palkar will premiere on Netflix on January 15. Further, Priyanka Chopra Jonas-starrer The White Tiger will also be out this month.