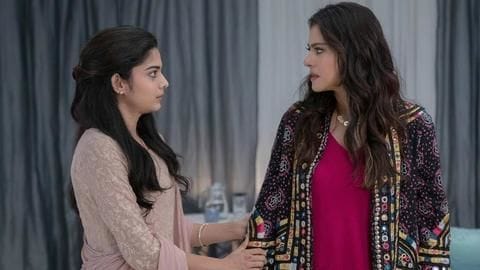 Renuka Shahane's upcoming Netflix film Tribhanga's trailer is now out. The trailer of the movie, that goes with the tag line "Tedhi Medhi Crazy," will take you on an emotional roller-coaster ride of love, hate, and motherhood through three generations. In the two-minute-long clip, the makers have given a glimpse of the gripping stories of three women, whose lives are inevitably intertwined. Here's more.

Details
Characters of the movie are based on 'Tribhanga' dance pose

The trailer of the movie opens with Kajol, an Odissi dancer and actor named Anuradha Apte (or Anu), narrating her and her family's story to a reporter. She goes on to describe the three leading characters of the movie and calls Tanvi Azmi's character "Abhanga" - a weird genius, Mithila Palker's character as "Samabhanga" - the balanced one, and herself as "Tribhanga."

Trailer
It has love, hate and a whole lot of drama

The trailer shows Kunaal Roy Kapur writing the biography of Nayan (Azmi) who slips into a coma, while her daughter unfolds the secrets from her childhood, giving a new perspective to motherhood. Kajol's character Anu can be seen embracing various emotions in the hospital and stating how despite her mother being present, she felt unsafe in the house, leaving the audience wanting for more.

Quote
Here is what Kajol said about the movie

"As a mother, I can vouch that there are challenges that women face daily as the smallest of things we do affect our children. Motherhood is a minefield of emotions captured extremely well by Renuka," Kajol said in a statement.

Release
The movie will be out on January 15

Directed by actor Renuka Shahane, Tribhanga is slated to start streaming on Netflix from January 15. Talking about the title of the movie, Shahane said it was chosen as the women in the movie "have their own quirks and idiosyncrasies, and yet are fascinating, beautiful and vibrant (sic)." Co-produced by actor Ajay Devgn, Tribhanga also stars Vaibhav Tatwawaadi and Kanwaljit Singh.

Apart from Tribhanga, streaming giant Netflix has a number of upcoming shows and movies lined up. In fact, Priyanka Chopra Jonas and Rajkummar Rao-starrer drama The White Tiger will be released on the platform on January 22.