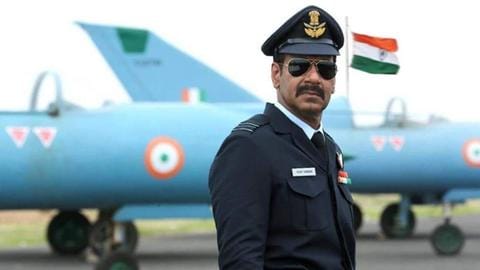 The official teaser for the upcoming war movie Bhuj: The Pride of India starring Ajay Devgn has been released. The short clip gives an insight into the high emotional and action quotient of the project. Also, it comes a day ahead of the trailer release. The Devgn-led period flick will see a digital release on Disney+ Hotstar during the Independence weekend (August 13).

It's going to be a visually pleasing ride

The clip begins much like its recently released introductory video with letters identifying the location of action as Bhuj in Gujarat in 1971. Then we get glimpses of air raids, training of Pakistan soldiers, close-up shots of Devgn, Sanjay Dutt, Sonakshi Sinha, Nora Fatehi, along with a hurried montage of scenes of various flavors. We can expect a visual extravaganza from this movie.

Another factor that deserves a mention is the crisp and patriotic dialogues. Though there is not much said in the teaser, in one scene Devgn speaks for the soldiers, "Mere marne ka maatam mat karna... Main jeeta hu marne ke liye, mera naam hai sipahi [Don't mourn my death... I live to die as I'm a soldier]." Chilling lines oozing bravado indeed!

Devgn as IAF officer Karnik will lead a heroic battle

For the unversed, Bhuj will tell the story of the Pakistani attack on Bhuj airbase in 1971. As shown in the motion poster, the enemy soldiers had raided the airfield 35 times in 14 days. But Indian Air Force officer Vijay Kumar Karnik (Devgn) had kept the airbase functional by employing the help of 300 women from a neighboring village to rebuild that base.

'Bhuj' will see Devgn turn into stunt director too

The thrilling war movie will also star Ammy Virk and Sharad Kelkar in prominent roles. Directed by Abhishek Dudhaiya, Devgn has reportedly designed certain action sequences in the film. When stunt coordinator Peter Hein was unavailable shortly, a report in 2020 had stated, the Golmaal star had taken up the responsibility to handle a hand-to-hand combat scene and an outdoor shoot.