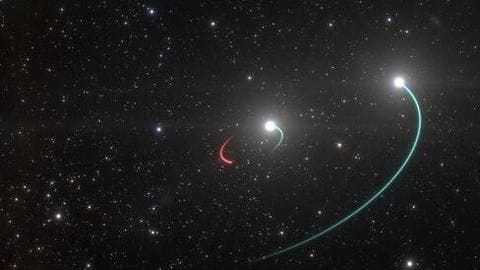 Astronomers have discovered a new black hole, and it is not really far away. The cosmic void, if the initial analysis is anything to go by, merely sits a 1,000 light-years away, making it the closest black hole to our planet ever to be found. It was spotted with the weird behavior of a two-star system. Here's all about it.

Details
Located in the Constellation Telescopium

The black hole, which has not been named yet, is estimated to be located 1,000 light-years or, as BBC explains, roughly 9.5 thousand, million, million km away in the Constellation Telescopium. We know, the kilometer-converted distance does not sound "very close" but it is actually more like our neighbor on the cosmic scale of the universe. Sitting right next door.

Discovery
How it was discovered?

Typically, black holes, which do not let light escape and are not seen directly, are discovered with the detection of X-rays they emit while devouring matter in close proximity. However, in this case, the scientists at the European Southern Observatory detected the back hole while trying to delve into the weird behavior of a two-star system called HR 6819.

Behavior
One star was orbiting an invisible object, the black hole

Though scientists had been studying the unusual behavior of the two stars for years, they recently tracked their movement and realized one of them appears to be orbiting an invisible object every 40 days. This, combined with the fact that the body in question was four times as massive as the Sun, led the team to posit that it might be a black hole.

"An invisible object with a mass at least 4 times that of the sun can only be a black hole," study lead Thomas Rivinius said, adding that "this system contains the nearest black hole to Earth that we know of."

Visibility
And, you can see stars dance around the black hole

What makes this case even more interesting is the fact you can see HR 6819 stars dance around the black hole with naked eyes. You don't need binoculars or telescopes to see the stars but would need access to clear skies in the southern hemisphere to spot them. The black hole, to note, will remain invisible.

Danger?
No danger to Earth, at all

That said, even though the black hole is pretty close on the cosmic scale and can be seen with the naked eyes, it is no threat to our planet. The distance between Earth and the black hole is more than enough to escape its pull and stay safe. Also, this void is fairly small compared to other 'supermassive' black holes existing in our universe.