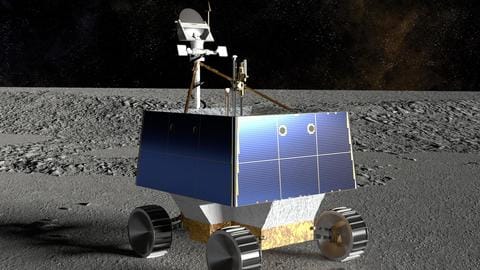 In May, NASA announced the VIPER mission to the moon under the Artemis program to look for water, its deposits, or at least signs of it on the dark side of the moon. NASA has recently revealed that the landing site for the VIPER rover would be near the western edge of the Nobile Crater at the moon's south pole. Here are more details.

VIPER stands for Volatiles Investigating Polar Exploration Rover. The mission is slated for late 2023. It is expected to cost NASA a whopping $433.5 million to develop. It is similar to previous rover missions to Mars and Moon. The launch, transit, and landing responsibilities for the VIPER mission have been assigned to Pittsburgh-based firm Astrobotic under NASA's Commercial Lunar Payload Services (CLPS) initiative.

The space agency will use a SpaceX Falcon Heavy rocket to propel the VIPER to the moon. The landing duties will be handled by Astrobotic's Griffin lander. NASA described the newly-announced landing site near the moon's south pole as "one of the coldest areas in our solar system." Scientists have only studied the region using remote sensing instruments until now.

NASA said that an important criterion for selecting the Nobile Crater landing site was that the landing site is exposed to sunlight so the VIPER stays warm and recharges during its 100-day journey on the moon. The site also had to be in the line of sight of the Earth so NASA's mission team could maintain communication with the rover.

Scientists already confirmed that there are deposits of ice at the moon's south pole, so the ongoing efforts are focused on mapping the region. The bigger unanswered question is what form the ice is in and where it came from. If sufficient deposits are found, it could also aid human sustenance on the moon during Artemis's subsequent manned missions.