If you are looking to buy a mid-range 5G smartphone, you might need to stop by for this deal. Realme has released a new A.16 update for the X7 Max 5G smartphone in India. Realme X7 Max 5G's Milky Way color option has gone on sale in India today at a starting price of Rs. 26,999. It is available via Flipkart and Realme's official website. Technology
Realme GT 5G will arrive in India before Diwali

In the 27th episode of #AskMadhav, Realme India CEO Madhav Sheth has revealed that the company will launch its flagship GT 5G smartphone in the country "before Diwali," which will be celebrated on November 4. Realme's newly-launched X7 Max 5G smartphone has gone on sale in India. The handset carries a starting price-tag of Rs. 26,999, and is available via Flipkart as well as the company's official website. Realme has launched its latest X7 Max 5G smartphone in India, alongside the Smart TV 4K series of televisions. Realme is all set to launch its X7 Max 5G smartphone in India on May 31. In the latest development, Flipkart has created a landing page, confirming the phone's availability via the e-commerce platform. 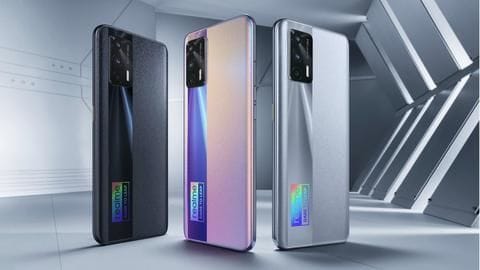 A week ahead of the launch of the Realme X7 Max 5G smartphone in India, MySmartPrice has revealed the prices of the handset, claiming it will start at Rs. 27,999. Realme is all set to launch the X7 Max 5G model in India on May 31. The handset is touted to arrive as India's first smartphone with a MediaTek Dimensity 1200 processor. Realme will launch the X7 Max model in India soon, the company has confirmed via an official microsite. The landing page also states that the handset will come with a MediaTek Dimensity 1200 chipset. As an addition to its X7 series of smartphones, Realme is gearing up to launch a new flagship model in India, the X7 Max, according to tipster Himanshu Agarwal.