SpaceX greenlighted for launching four civilians into space next week 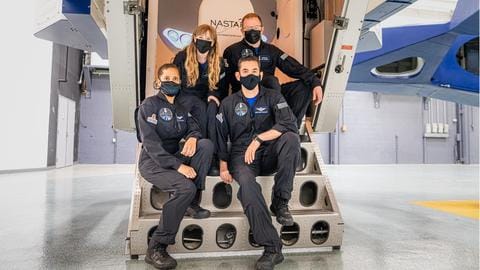 Elon Musk announced plans to fly an all-civilian crew to space in February this year. Now, the mission is finally set to make history next week when a crew of four civilians will make a three-day trip around Earth. SpaceX's Inspiration4 mission led by Shift4 Payments founder Jared Isaacman has raised funds for the St. Jude Children's Research Hospital, Memphis. Here are more details.

The four civilians will journey around the Earth inside a Crew Dragon spacecraft strapped to a SpaceX Falcon 9 rocket for launch. The official account for the mission tweeted that Inspiration4 and SpaceX have completed the flight readiness review and are on track for the launch. The team blasts off on September 15 from NASA's Kennedy Space Center in Cape Canaveral, Florida.

Rigorous training
The mission is a fundraising event for St. Jude Hospital

The crew was announced in March and its preparations included "centrifuge training, Dragon simulations, observations of other SpaceX launch operations, Zero-G plane training, altitude training, and additional classroom, simulation and medical testing (sic)," Inspiration4 said in a release. Isaacman donated $100 million to St. Jude Hospital and hasn't disclosed how much he paid for the flight. He also donated two seats on the mission.

The crew of four led by the 38-year old billionaire comprises Hayley Arceneaux (physician assistant at St. Jude Hospital), Dr. Sian Proctor (trained pilot and geoscientist), and Chris Sembroski (Air Force veteran and Lockheed Martin employee). Arceneaux is a bone cancer survivor who had a part of her femur replaced by a metal rod at the age of 10.

29-year old Arceneaux will become the first space traveler with a prosthetic body part. Dr. Proctor won her spot on the flight by winning a competition conducted by Shift4 Payments. Participants had to create e-commerce stores and tweet why they wanted to fly to space. Sembroski was chosen for the Inspiration4 mission from 72,000+ entries received in a fundraising campaign for St. Jude Hospital.

Isaacman will command the mission and pilot the Crew Dragon spacecraft. Dr. Proctor will serve as Mission Pilot and backup commander. Sembroski will be the Mission Specialist tasked with managing payload, science experiments, and communications with mission control. Meanwhile, Arceneaux will serve as Medical Officer. The capsule is expected to orbit Earth for three days at an altitude of nearly 540km.

Netflix has released the trailer for a five-part docuseries titled Countdown: Inspiration4 Mission to Space chronicling the epic journey. Directed by Emmy award winner Jason Hehir, it is billed as Netflix's first docuseries to cover events in near real-time. The streaming starts on September 6.