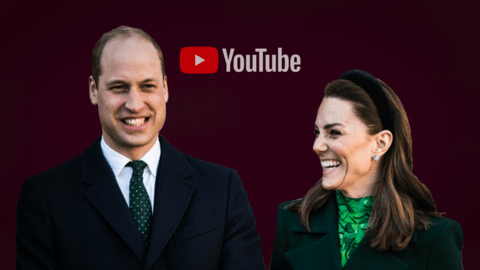 A little over a month after Prince Harry and Meghan Markle announced their first Netflix series, Prince William and Kate Middleton have launched their YouTube channel. The Royal couple turned YouTubers last week, with their aptly and straight named channel, The Duke and Duchess of Cambridge. They officially announced this on social media, "Better late than never - we're now on YouTube."

Introduction
The playful introductory video has over 3 million views

The first video titled Welcome to our official YouTube channel! starts with Prince William playfully telling Middleton to watch what she says, as it's all being recorded. She responds laughing, and says, "I know." Their light-hearted video has already amassed over three million views, since this is probably the first time they are trying to lift the veil behind the usually secretive Royal family.

Meanwhile, people on YouTube have gone crazy after watching this video, and are commenting about what they would like to see on their channel. One of the top comments says that the next video should be about them reacting to the controversial Harry-Meghan Oprah Winfrey interview. Other video ideas include Kensington Palace tour, Royal mukbang, and Middleton reviewing the season's trending beauty products.

Hold Still
The second video has a high emotional quotient

The second video on their channel titled Shielding Mila - Hold Still highlights a heart-melting phone conversation between Middleton and a 5-year-old cancer patient, Mila Sneddon. Sneddon is a finalist of a photography exhibition called Hold Still by the National Portrait Gallery. Her photo depicts her struggle and that of her family with getting proper care and chemotherapy during a global pandemic.

Anniversary
The couple recently celebrated 10 years of their marriage

Separately, the Royal couple celebrated their 10th wedding anniversary a few days ago. They marked the occasion by releasing two new portraits. The Duke and Duchess of Cambridge also surprised fans by showing a rare look into their lives via Instagram. The footage was from last year at their Norfolk home. They have three kids together: Prince George, Princess Charlotte, and Prince Louis.